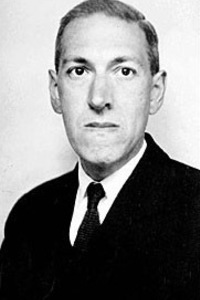 H. P. (Howard Phillips) Lovecraft was an American author who achieved posthumous fame through his influential works of horror fiction. Virtually unknown and only published in pulp magazines before he died in poverty, he is now regarded as one of the most significant 20th-century authors in his genre. Intellectually precocious but sensitive, Lovecraft had begun composing rudimentary horror tales and had begun to be overwhelmed by feelings of anxiety by the age of eight. In early adulthood he was established in a reclusive ‘nightbird’ lifestyle without occupation or pursuit of romantic adventures. In 1913 his conduct of a long running controversy in the letters page of a story magazine led to his being invited to participate in an amateur journalism association. Encouraged, he started circulating his stories; he was 31 at the time of his first publication in a professional magazine, within a few years he was a regular contributor to newly founded Weird Tales magazine.

Long acknowledged as a master of nightmarish visions, H. P. Lovecraft established the genuineness and dignity of his own pioneering fiction in 1931 with...read more »

The Call of Cthulu, the tale of a horrifying underwater monster coming to life and threatening mankind, is H.P. Lovecraft’s most famous and most widely ...read more »

A nameless terror surges through centuries to engulf the soul of Charles Dexter Ward, a brilliant New England antiquarian. Ward is driven to unleash the...read more »

Set in the fictional town of Arkham, Massachusetts, an unnamed narrator investigates a local area known as the ‘blasted hearth.’ After failing to extrac...read more »

In the degenerate, unpopular backwater of Dunwich, Wilbur Whately, a most unusual child, is born. Of unnatural parentage, he grows at an uncanny pace to...read more »

Considered to be one of the first of Lovecraft’s Cthulhu Mythos stories, this short story by was written in 1923 and first published in the popular maga...read more »

When you open this book you will be lost - lost in a world of dreadful nightmare brought to screaming life by the century’s greatest master of adult fan...read more »

Often considered as Lovecrafts first Cthulhu Mythos story, The Nameless City is an ancient ruin located somewhere in the deserts of the Arabian Peninsul...read more »

Nathaniel Wingate Peaslee is a professor of political economy at Miskatonic University. Following a fainting spell in 1908 he returns to his senses in 1...read more »

Rumours abound of sinister goings-on in the ancient Massachusetts seaport of Innsmouth. The once prosperous town, which has fallen into a state of decre...read more »

For many years the protagonist and his uncle, Dr. Elihu Whipple, have nurtured a fascination with an old, abandoned house on Benefit Street. Dr. Whipple...read more »

Daniel Upton, the story’s narrator, begins by telling that he has killed his best friend, Edward Derby, and that he hopes his account will prove that he...read more »

The story is told by Albert N. Wilmarth, an instructor of literature at Miskatonic University in Arkham. When local newspapers report strange things see...read more »