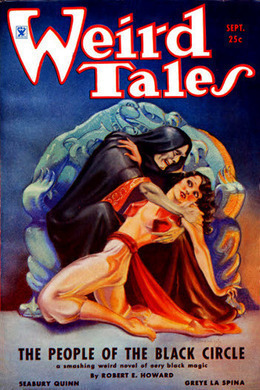 The People of the Black Circle

Regarded by critics and fans alike as one of the most thrilling and tightly plotted of the Conan the Barbarian tales, The People of the Black Circle has the intrepid warrior absconding with a beautiful princess and desperately trying to foil a plot of world domination that has been hatched by a nefarious cabal of ruthless killers.

The king of Vendhya was dying. Through the hot, stifling night the temple gongs boomed and the conchs roared. Their clamor was a faint echo in the gold-domed chamber where Bunda Chand struggled on the velvet-cushioned dais. Beads of sweat glistened on his dark skin; his fingers twisted the gold-worked fabric beneath him. He was young; no spear had touched him, no poison lurked in his wine. But his veins stood out like blue cords on his temples, and his eyes dilated with the nearness of death. Trembling slave-girls knelt at the foot of the dais, and leaning down to him, watching him with passionate intensity, was his sister, the Devi Yasmina. With her was the wazam, a noble grown old in the royal court.

She threw up her head in a gusty gesture of wrath and despair as the thunder of the distant drums reached her ears.

‘The priests and their clamor!’ she exclaimed. ‘They are no wiser than the leeches who are helpless! Nay, he dies and none can say why. He is dying now–and I stand here helpless, who would burn the whole city and spill the blood of thousands to save him.’

‘Not a man of Ayodhya but would die in his place, if it might be, Devi,’ answered the wazam. ‘This poison–’

‘I tell you it is not poison!’ she cried. ‘Since his birth he has been guarded so closely that the cleverest poisoners of the East could not reach him. Five skulls bleaching on the Tower of the Kites can testify to attempts which were made–and which failed. As you well know, there are ten men and ten women whose sole duty is to taste his food and wine, and fifty armed warriors guard his chamber as they guard it now. No, it is not poison; it is sorcery–black, ghastly magic–’

She ceased as the king spoke; his livid lips did not move, and there was no recognition in his glassy eyes. But his voice rose in an eery call, indistinct and far away, as if called to her from beyond vast, wind-blown gulfs.

‘Yasmina! Yasmina! My sister, where are you? I can not find you. All is darkness, and the roaring of great winds!’

‘Brother!’ cried Yasmina, catching his limp hand in a convulsive grasp. ‘I am here! Do you not know me–’

Her voice died at the utter vacancy of his face. A low confused moan waned from his mouth. The slave-girls at the foot of the dais whimpered with fear, and Yasmina beat her breast in anguish.

In another part of the city a man stood in a latticed balcony overlooking a long street in which torches tossed luridly, smokily revealing upturned dark faces and the whites of gleaming eyes. A long-drawn wailing rose from the multitude.

The man shrugged his broad shoulders and turned back into the arabesque chamber. He was a tall man, compactly built, and richly clad.

‘The king is not yet dead, but the dirge is sounded,’ he said to another man who sat cross-legged on a mat in a corner. This man was clad in a brown camel-hair robe and sandals, and a green turban was on his head. His expression was tranquil, his gaze impersonal.

‘The people know he will never see another dawn,’ this man answered.

The first speaker favored him with a long, searching stare.

‘What I can not understand,’ he said, ‘is why I have had to wait so long for your masters to strike. If they have slain the king now, why could they not have slain him months ago?’

‘Even the arts you call sorcery are governed by cosmic laws,’ answered the man in the green turban. ‘The stars direct these actions, as in other affairs. Not even my masters can alter the stars. Not until the heavens were in the proper order could they perform this necromancy.’ With a long, stained fingernail he mapped the constellations on the marble-tiled floor. ‘The slant of the moon presaged evil for the king of Vendhya; the stars are in turmoil, the Serpent in the House of the Elephant. During such juxtaposition, the invisible guardians are removed from the spirit of Bhunda Chand. A path is opened in the unseen realms, and once a point of contact was established, mighty powers were put in play along that path.’

‘Point of contact?’ inquired the other. ‘Do you mean that lock of Bhunda Chand’s hair?’