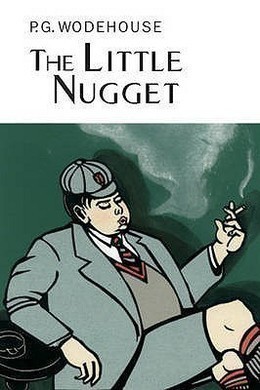 The Little Nugget is one of the novels in which Wodehouse found his feet, a light comic thriller set in an English prep school for the children of the nobility and gentry. Into their midst comes eleven-year-old Ogden Ford, the mouthy, overweight, chain-smoking son of an American millionaire. Ogden (whom we meet again in Piccadilly Jim) is the object of a kidnap attempt which forms the basis of the plot. The comedy arises from Wodehouse’s favourite topics of Anglo-American misunderstanding and the absurdities of school life.

If the management of the Hotel Guelph, that London landmark, could have been present at three o’clock one afternoon in early January in the sitting-room of the suite which they had assigned to Mrs Elmer Ford, late of New York, they might well have felt a little aggrieved. Philosophers among them would possibly have meditated on the limitations of human effort; for they had done their best for Mrs Ford. They had housed her well. They had fed her well. They had caused inspired servants to anticipate her every need. Yet here she was, in the midst of all these aids to a contented mind, exhibiting a restlessness and impatience of her surroundings that would have been noticeable in a caged tigress or a prisoner of the Bastille. She paced the room. She sat down, picked up a novel, dropped it, and, rising, resumed her patrol. The clock striking, she compared it with her watch, which she had consulted two minutes before. She opened the locket that hung by a gold chain from her neck, looked at its contents, and sighed. Finally, going quickly into the bedroom, she took from a suit-case a framed oil-painting, and returning with it to the sitting-room, placed it on a chair, and stepped back, gazing at it hungrily. Her large brown eyes, normally hard and imperious, were strangely softened. Her mouth quivered.

The picture which had inspired this exhibition of feeling would probably not have affected the casual spectator to quite the same degree. He would have seen merely a very faulty and amateurish portrait of a singularly repellent little boy of about eleven, who stared out from the canvas with an expression half stolid, half querulous; a bulgy, overfed little boy; a little boy who looked exactly what he was, the spoiled child of parents who had far more money than was good for them.

As Mrs Ford gazed at the picture, and the picture stared back at her, the telephone bell rang. She ran to it eagerly. It was the office of the hotel, announcing a caller.

She returned to the portrait. The look of impatience, which had left her face as the bell sounded, was back now. She suppressed it with an effort as her visitor entered.

Lord Mountry was a blond, pink-faced, fair-moustached young man of about twenty-eight–a thick-set, solemn young man. He winced as he caught sight of the picture, which fixed him with a stony eye immediately on his entry, and quickly looked away.

‘I say, it’s all right, Mrs Ford.’ He was of the type which wastes no time on preliminary greetings. ‘I’ve got him.’

‘Oh! I–I was thinking of something else. Won’t you sit down?’

‘The artist, you know. You remember you said at lunch the other day you wanted your little boy’s portrait painted, as you only had one of him, aged eleven–’

‘This is Ogden, Lord Mountry. I painted this myself.’

His lordship, who had selected a chair that enabled him to present a shoulder to the painting, and was wearing a slightly dogged look suggestive of one who ‘turns no more his head, because he knows a frightful fiend doth close behind him tread’, forced himself round, and met his gaze with as much nonchalance as he could summon up.

‘I recommended this fellow, Stanborough, if you remember. He’s a great pal of mine, and I’d like to give him a leg up if I could. They tell me he’s a topping artist. Don’t know much about it myself. You told me to bring him round here this afternoon, you remember, to talk things over. He’s waiting downstairs.’

‘Oh yes, yes. Of course, I’ve not forgotten. Thank you so much, Lord Mountry.’

‘Rather a good scheme occurred to me, that is, if you haven’t thought over the idea of that trip on my yacht and decided it would bore you to death. You still feel like making one of the party–what?’

Mrs Ford shot a swift glance at the clock.

‘I’m looking forward to it,’ she said.

‘Well, then, why shouldn’t we kill two birds with one stone? Combine the voyage and the portrait, don’t you know. You could bring your little boy along–he’d love the trip–and I’d bring Stanborough–what?’