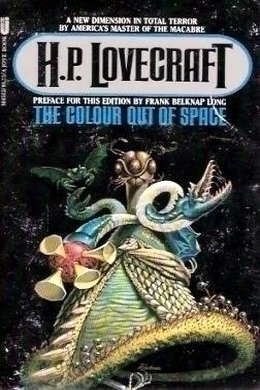 The Color Out Of Space

Set in the fictional town of Arkham, Massachusetts, an unnamed narrator investigates a local area known as the ‘blasted hearth.’ After failing to extract any information from the Arkham locals, the narrator encounters an old man, Ammi Pierce, who relates the story of a farmer who once lived there. The hearth, he claims, was caused by a meteorite that fell onto the farmer’s field in 1882. The Color Out of Space is one of H.P. Lovecraft’s best-loved and most critically acclaimed stories. According to the author, it was also his personal favorite. It has been adapted twice for film; first in 1967 and later in 1987.

West of Arkham the hills rise wild, and there are valleys with deep woods that no axe has ever cut. There are dark narrow glens where the trees slope fantastically, and where thin brooklets trickle without ever having caught the glint of sunlight. On the gentle slopes there are farms, ancient and rocky, with squat, moss-coated cottages brooding eternally over old New England secrets in the lee of great ledges; but these are all vacant now, the wide chimneys crumbling and the shingled sides bulging perilously beneath low gambrel roofs.

The old folk have gone away, and foreigners do not like to live there. French- Canadians have tried it, Italians have tried it, and the Poles have come and departed. It is not because of anything that can be seen or heard or handled, but because of something that is imagined. The place is not good for imagination, and does not bring restful dreams at night. It must be this which keeps the foreigners away, for old Ammi Pierce has never told them of anything he recalls from the strange days. Ammi, whose head has been a little queer for years, is the only one who still remains, or who ever talks of the strange days; and he dares to do this because his house is so near the open fields and the traveled roads around Arkham.

There was once a road over the hills and through the valleys, that ran straight where the blasted heath is now; but people ceased to use it and a new road was laid curving far toward the south. Traces of the old one can still be found amidst the weeds of a returning wilderness, and some of them will doubtless linger even when half the hollows are flooded for the new reservoir. Then the dark woods will be cut down and the blasted heath will slumber far below blue waters whose surface will mirror the sky and ripple in the sun. And the secrets of the strange days will be one with the deep’s secrets; one with the hidden lore of old ocean, and all the mystery of primal earth.

When I went into the hills and vales to survey for the new reservoir they told me the place was evil. They told me this in Arkham, and because that is a very old town full of witch legends I thought the evil must he something which grandams had whispered to children through centuries. The name “blasted heath” seemed to me very odd and theatrical, and I wondered how it had come into the folklore of a Puritan people. Then I saw that dark westward tangle of glens and slopes for myself, end ceased to wonder at anything beside its own elder mystery. It was morning when I saw it, but shadow lurked always there. The trees grew too thickly, and their trunks were too big for any healthy New England wood. There was too much silence in the dim alleys between them, and the floor was too soft with the dank moss and mattings of infinite years of decay.

In the open spaces, mostly along the line of the old road, there were little hillside farms; sometimes with all the buildings standing, sometimes with only 6ne or two, and sometimes with only a lone chimney or fast-filling cellar. Weeds and briars reigned, and furtive wild things rustled in the undergrowth. Upon everything was a haze of restlessness and oppression; a touch of the unreal and the grotesque, as if some vital element of perspective or chiaroscuro were awry. I did not wonder that the foreigners would not stay, for this was no region to sleep in. It was too much like a landscape of Salvator Rosa; too much like some forbidden woodcut in a tale of terror.