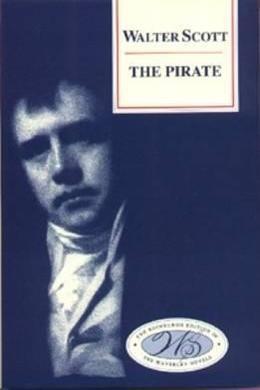 Based on the life of notorious pirate John Gow, The Pirate takes place on the island of Shetland around the year 1700. The shipwrecked Captain Cleveland’s arrival sets off a bitter conflict with the son of a reformed pirate, and their rivalry for the affection of two local woman sets off a series of tragic events.

That long, narrow, and irregular island, usually called the mainland of Zetland, because it is by far the largest of that Archipelago, terminates, as is well known to the mariners who navigate the stormy seas which surround the Thule of the ancients, in a cliff of immense height, entitled Sumburgh-Head, which presents its bare scalp and naked sides to the weight of a tremendous surge, forming the extreme point of the isle to the south-east. This lofty promontory is constantly exposed to the current of a strong and furious tide, which, setting in betwixt the Orkney and Zetland Islands, and running with force only inferior to that of the Pentland Frith, takes its name from the headland we have mentioned, and is called the Roost of Sumburgh; roost being the phrase assigned in those isles to currents of this description.

On the land side, the promontory is covered with short grass, and slopes steeply down to a little isthmus, upon which the sea has encroached in creeks, which, advancing from either side of the island, gradually work their way forward, and seem as if in a short time they would form a junction, and altogether insulate Sumburgh-Head, when what is now a cape, will become a lonely mountain islet, severed from the mainland, of which it is at present the terminating extremity.

Man, however, had in former days considered this as a remote or unlikely event; for a Norwegian chief of other times, or, as other accounts said, and as the name of Jarlshof seemed to imply, an ancient Earl of the Orkneys had selected this neck of land as the place for establishing a mansion-house. It has been long entirely deserted, and the vestiges only can be discerned with difficulty; for the loose sand, borne on the tempestuous gales of those stormy regions, has overblown, and almost buried, the ruins of the buildings; but in the end of the seventeenth century, a part of the Earl’s mansion was still entire and habitable. It was a rude building of rough stone, with nothing about it to gratify the eye, or to excite the imagination; a large old-fashioned narrow house, with a very steep roof, covered with flags composed of grey sandstone, would perhaps convey the best idea of the place to a modern reader. The windows were few, very small in size, and distributed up and down the building with utter contempt of regularity. Against the main structure had rested, in former times, certain smaller co-partments of the mansion-house, containing offices, or subordinate apartments, necessary for the accommodation of the Earl’s retainers and menials. But these had become ruinous; and the rafters had been taken down for fire-wood, or for other purposes; the walls had given way in many places; and, to complete the devastation, the sand had already drifted amongst the ruins, and filled up what had been once the chambers they contained, to the depth of two or three feet.

Amid this desolation, the inhabitants of Jarlshof had contrived, by constant labour and attention, to keep in order a few roods of land, which had been enclosed as a garden, and which, sheltered by the walls of the house itself, from the relentless sea-blast, produced such vegetables as the climate could bring forth, or rather as the sea-gale would permit to grow; for these islands experience even less of the rigour of cold than is encountered on the mainland of Scotland; but, unsheltered by a wall of some sort or other, it is scarce possible to raise even the most ordinary culinary vegetables; and as for shrubs or trees, they are entirely out of the question, such is the force of the sweeping sea-blast.