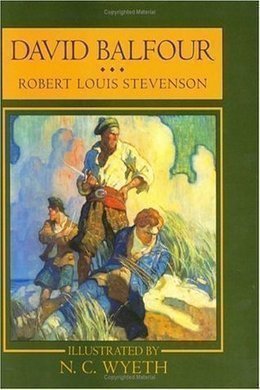 Catriona (David Balfour) is the sequel to Kidnapped, and starts at the exact moment that Robert Louis Stevenson’s more famous book ends - with Balfour in Edinburgh, standing cold and remorseful outside the offices of the British Linen Company. From there begins a rollicking series of adventures which sees our eponymous hero successively marooned on a remote island, traveling through Holland and France where he fights for his life with his old comrade Alan Breck, and finding time to fall in love with the spirited and beautiful Catriona, grand-daughter of the infamous ‘Highland Rogue’, Rob Roy.

The 25th day of August, 1751, about two in the afternoon, I, David Balfour, came forth of the British Linen Company, a porter attending me with a bag of money, and some of the chief of these merchants bowing me from their doors. Two days before, and even so late as yestermorning, I was like a beggar-man by the wayside, clad in rags, brought down to my last shillings, my companion a condemned traitor, a price set on my own head for a crime with the news of which the country rang. To-day I was served heir to my position in life, a landed laird, a bank porter by me carrying my gold, recommendations in my pocket, and (in the words of the saying) the ball directly at my foot.

There were two circumstances that served me as ballast to so much sail. The first was the very difficult and deadly business I had still to handle; the second, the place that I was in. The tall, black city, and the numbers and movement and noise of so many folk, made a new world for me, after the moorland braes, the sea-sands and the still country-sides that I had frequented up to then. The throng of the citizens in particular abashed me. Rankeillor’s son was short and small in the girth; his clothes scarce held on me; and it was plain I was ill qualified to strut in the front of a bank-porter. It was plain, if I did so, I should but set folk laughing, and (what was worse in my case) set them asking questions. So that I behooved to come by some clothes of my own, and in the meanwhile to walk by the porter’s side, and put my hand on his arm as though we were a pair of friends.

At a merchant’s in the Luckenbooths I had myself fitted out: none too fine, for I had no idea to appear like a beggar on horseback; but comely and responsible, so that servants should respect me. Thence to an armourer’s, where I got a plain sword, to suit with my degree in life. I felt safer with the weapon, though (for one so ignorant of defence) it might be called an added danger. The porter, who was naturally a man of some experience, judged my accoutrement to be well chosen.

“Naething kenspeckle,” said he; “plain, dacent claes. As for the rapier, nae doubt it sits wi’ your degree; but an I had been you, I would has waired my siller better-gates than that.” And he proposed I should buy winter-hosen from a wife in the Cowgate-back, that was a cousin of his own, and made them “extraordinar endurable.”

But I had other matters on my hand more pressing. Here I was in this old, black city, which was for all the world like a rabbit-warren, not only by the number of its indwellers, but the complication of its passages and holes. It was, indeed, a place where no stranger had a chance to find a friend, let be another stranger. Suppose him even to hit on the right close, people dwelt so thronged in these tall houses, he might very well seek a day before he chanced on the right door. The ordinary course was to hire a lad they called a caddie, who was like a guide or pilot, led you where you had occasion, and (your errands being done) brought you again where you were lodging. But these caddies, being always employed in the same sort of services, and having it for obligation to be well informed of every house and person in the city, had grown to form a brotherhood of spies; and I knew from tales of Mr. Campbell’s how they communicated one with another, what a rage of curiosity they conceived as to their employer’s business, and how they were like eyes and fingers to the police. It would be a piece of little wisdom, the way I was now placed, to take such a ferret to my tails. I had three visits to make, all immediately needful: to my kinsman Mr. Balfour of Pilrig, to Stewart the Writer that was Appin’s agent, and to William Grant Esquire of Prestongrange, Lord Advocate of Scotland. Mr. Balfour’s was a non-committal visit; and besides (Pilrig being in the country) I made bold to find the way to it myself, with the help of my two legs and a Scots tongue. But the rest were in a different case. Not only was the visit to Appin’s agent, in the midst of the cry about the Appin murder, dangerous in itself, but it was highly inconsistent with the other. I was like to have a bad enough time of it with my Lord Advocate Grant, the best of ways; but to go to him hot-foot from Appin’s agent, was little likely to mend my own affairs, and might prove the mere ruin of friend Alan’s. The whole thing, besides, gave me a look of running with the hare and hunting with the hounds that was little to my fancy. I determined, therefore, to be done at once with Mr. Stewart and the whole Jacobitical side of my business, and to profit for that purpose by the guidance of the porter at my side. But it chanced I had scarce given him the address, when there came a sprinkle of rain—nothing to hurt, only for my new clothes—and we took shelter under a pend at the head of a close or alley.