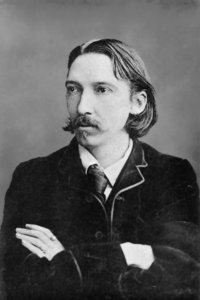 Robert Louis Stevenson was a Scottish novelist, poet, and travel writer, and a leading representative of Neo-romanticism in English literature. Stevenson was a celebrity in his own time, but with the rise of modern literature after World War I, he was seen for much of the 20th century as a writer of the second class, relegated to children’s literature and horror genres. Condemned by authors such as Virginia and Leonard Woolf, he was gradually excluded from the canon of literature taught in schools. His exclusion reached a height when in the 1973 2,000-page Oxford Anthology of English Literature Stevenson was entirely unmentioned.

The late 20th century however, saw the start of a re-evaluation of Stevenson as an artist of great range and insight, a literary theorist, an essayist and social critic, a witness to the colonial history of the Pacific Islands, and a humanist. Stevenson is now being considered as a peer of authors such as Joseph Conrad (whom Stevenson influenced with his South Seas fiction) and Henry James, with new scholarly studies and organizations devoted to Stevenson. No matter what the scholarly reception, Stevenson remains very popular around the world, and is ranked the 25th most translated author in the world, ahead of fellow nineteenth-century writers Charles Dickens, Oscar Wilde and Edgar Allan Poe. (source: Wikipedia)

Robert Louis Stevenson’s venerated volume of children’s poems has prospered during more than a century in print. Here is a comfortable world of sunny ga...read more »

Catriona (David Balfour) is the sequel to Kidnapped, and starts at the exact moment that Robert Louis Stevenson’s more famous book ends - with Balfour i...read more »

Robert Louis Stevenson’s Fables was published in New York by Longmans, Green in 1902. Previously, the thirteen fables had been published with other work...read more »

“The first experience can never be repeated. The first love, the first sunrise, the first South Sea island, are memories apart …” In the South Seas reco...read more »

Set in Scotland after the Jacobite rebellion, young David Balfour leaves home and goes to the sinister House of Shaws. There, he finds himself kidnapped...read more »

The irreverent tale revolves around the exploits of Captain Jacques St. Ives who is captured by the British and thrown in jail. While there, he meets th...read more »

From the beloved author of Treasure Island Originally serialized in a periodical of boys’ adventure fiction, The Black Arrow is a swashbuckling portrait...read more »

Stevenson’s brooding historical romance demonstrates his most abiding theme—the elemental struggle between good and evil—as it unfolds against a hauntin...read more »

Good and evil, right and wrong. Both are seen through the eyes of John Utterson, a lawyer and friend of the scientist Dr. Jekyll. After hearing the alar...read more »

Travels with a Donkey in the Cevennes (1879)

Travels with a Donkey in the Cévennes recounts Robert Louis Stevenson’s 120 mile, 12 day hike, accompanied only by his stubborn and unwieldy donkey, thr...read more »

Jim Hawkins has led an ordinary life as an innkeeper’s son until the day he inadvertently discovers a treasure map in a trunk belonging to an old sea ca...read more »