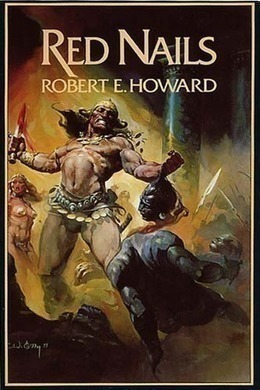 Can’t get enough of Conan the Barbarian? Fans rank the tale Red Nails as one of the best stories in the series that ultimately inspired Arnold Schwarzenegger’s star turn in the famed 1982 action-adventure classic. This tale unfolds deep in the jungles of what is now Mexico or South America, where Conan has traveled in pursuit of his love interest, the brave and beautiful Valeria.

The woman on the horse reined in her weary steed. It stood with its legs wide-braced, its head drooping, as if it found even the weight of the gold-tasseled, red-leather bridle too heavy. The woman drew a booted foot out of the silver stirrup and swung down from the gilt-worked saddle. She made the reins fast to the fork of a sapling, and turned about, hands on her hips, to survey her surroundings.

They were not inviting. Giant trees hemmed in the small pool where her horse had just drunk. Clumps of undergrowth limited the vision that quested under the somber twilight of the lofty arches formed by intertwining branches. The woman shivered with a twitch of her magnificent shoulders, and then cursed.

She was tall, full-bosomed and large-limbed, with compact shoulders. Her whole figure reflected an unusual strength, without detracting from the femininity of her appearance. She was all woman, in spite of her bearing and her garments. The latter were incongruous, in view of her present environs. Instead of a skirt she wore short, wide-legged silk breeches, which ceased a hand’s breadth short of her knees, and were upheld by a wide silken sash worn as a girdle. Flaring-topped boots of soft leather came almost to her knees, and a low-necked, wide-collared, wide-sleeved silk shirt completed her costume. On one shapely hip she wore a straight double-edged sword, and on the other a long dirk. Her unruly golden hair, cut square at her shoulders, was confined by a band of crimson satin.

Against the background of somber, primitive forest she posed with an unconscious picturesqueness, bizarre and out of place. She should have been posed against a background of sea-clouds, painted masts and wheeling gulls. There was the color of the sea in her wide eyes. And that was as it should have been, because this was Valeria of the Red Brotherhood, whose deeds are celebrated in song and ballad wherever seafarers gather.

She strove to pierce the sullen green roof of the arched branches and see the sky which presumably lay about it, but presently gave it up with a muttered oath.

Leaving her horse tied she strode off toward the east, glancing back toward the pool from time to time in order to fix her route in her mind. The silence of the forest depressed her. No birds sang in the lofty boughs, nor did any rustling in the bushes indicate the presence of any small animals. For leagues she had traveled in a realm of brooding stillness, broken only by the sounds of her own flight.

She had slaked her thirst at the pool, but she felt the gnawings of hunger and began looking about for some of the fruit on which she had sustained herself since exhausting the food she had brought in her saddle-bags.

Ahead of her, presently, she saw an outcropping of dark, flint-like rock that sloped upward into what looked like a rugged crag rising among the trees. Its summit was lost to view amidst a cloud of encircling leaves. Perhaps its peak rose above the tree-tops, and from it she could see what lay beyond–if, indeed, anything lay beyond but more of this apparently illimitable forest through which she had ridden for so many days.

A narrow ridge formed a natural ramp that led up the steep face of the crag. After she had ascended some fifty feet she came to the belt of leaves that surrounded the rock. The trunks of the trees did not crowd close to the crag, but the ends of their lower branches extended about it, veiling it with their foliage. She groped on in leafy obscurity, not able to see either above or below her; but presently she glimpsed blue sky, and a moment later came out in the clear, hot sunlight and saw the forest roof stretching away under her feet.

She was standing on a broad shelf which was about even with the tree-tops, and from it rose a spire-like jut that was the ultimate peak of the crag she had climbed. But something else caught her attention at the moment. Her foot had struck something in the litter of blown dead leaves which carpeted the shelf. She kicked them aside and looked down on the skeleton of a man. She ran an experienced eye over the bleached frame, but saw no broken bones nor any sign of violence. The man must have died a natural death; though why he should have climbed a tall crag to die she could not imagine.