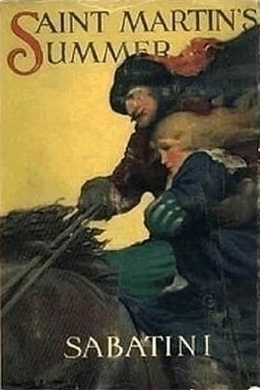 Martin Marie Rigobert de Ganache had far too many important things to do than worry about the plight of an endangered heiress. But as he and the unfortunate lady become more involved, he has no choice but to carry on with the situation until it is reaches its fitting conclusion.

My Lord of Tressan, His Majesty’s Seneschal of Dauphiny, sat at his ease, his purple doublet all undone, to yield greater freedom to his vast bulk, a yellow silken undergarment visible through the gap, as is visible the flesh of some fruit that, swollen with over-ripeness, has burst its skin.

His wig–imposed upon him by necessity, not fashion–lay on the table amid a confusion of dusty papers, and on his little fat nose, round and red as a cherry at its end, rested the bridge of his horn-rimmed spectacles. His bald head–so bald and shining that it conveyed an unpleasant sense of nakedness, suggesting that its uncovering had been an act of indelicacy on the owner’s part–rested on the back of his great chair, and hid from sight the gaudy escutcheon wrought upon the crimson leather. His eyes were closed, his mouth open, and whether from that mouth or from his nose–or, perhaps, conflicting for issue between both–there came a snorting, rumbling sound to proclaim that my Lord the Seneschal was hard at work upon the King’s business.

Yonder, at a meaner table, in an angle between two windows, a pale-faced thread-bare secretary was performing for a yearly pittance the duties for which my Lord the Seneschal was rewarded by emoluments disproportionately large.

The air of that vast apartment was disturbed by the sounds of Monsieur de Tressan’s slumbers, the scratch and splutter of the secretary’s pen, and the occasional hiss and crackle of the logs that burned in the great, cavern-like fireplace. Suddenly to these another sound was added. With a rasp and rattle the heavy curtains of blue velvet flecked with silver fleurs-de-lys were swept from the doorway, and the master of Monsieur de Tressan’s household, in a well filled suit of black relieved by his heavy chain of office, stepped pompously forward.

The secretary dropped his pen, and shot a frightened glance at his slumbering master; then raised his hands above his head, and shook them wildly at the head lackey.

Anselme paused. He appreciated the gravity of the situation. His bearing lost some of its dignity; his face underwent a change. Then with a recovery of some part of his erstwhile resolution:

“Nevertheless, he must be awakened,” he announced, but in an undertone, as if afraid to do the thing he said must needs be done.

The horror in the secretary’s eyes increased, but Anselme’s reflected none of it. It was a grave thing, he knew by former experience, to arouse His Majesty’s Seneschal of Dauphiny from his after-dinner nap; but it was an almost graver thing to fail in obedience to that black-eyed woman below who was demanding an audience.

Anselme realized that he was between the sword and the wall. He was, however, a man of a deliberate habit that was begotten of inherent indolence and nurtured among the good things that fell to his share as master of the Tressan household. Thoughtfully he caressed his tuft of red beard, puffed out his cheeks, and raised his eyes to the ceiling in appeal or denunciation to the heaven which he believed was somewhere beyond it.

“Nevertheless, he must be awakened,” he repeated.

And then Fate came to his assistance. Somewhere in the house a door banged like a cannon-shot. Perspiration broke upon the secretary’s brow. He sank limply back in his chair, giving himself up for lost. Anselme started and bit the knuckle of his forefinger in a manner suggesting an inarticulate imprecation.

My Lord the Seneschal moved. The noise of his slumbers culminated in a sudden, choking grunt, and abruptly ceased. His eyelids rolled slowly back, like an owl’s, revealing pale blue eyes, which fixed themselves first upon the ceiling, then upon Anselme. Instantly he sat up, puffing and scowling, his hands shuffling his papers.

“A thousand devils! Anselme, why am I interrupted?” he grumbled querulously, still half-asleep. “What the plague do you want? Have you no thought for the King’s affairs? Babylas”–this to his secretary–“did I not tell you that I had much to do; that I must not be disturbed?”

It was the great vanity of the life of this man, who did nothing, to appear the busiest fellow in all France, and no audience–not even that of his own lackeys–was too mean for him to take the stage to in that predilect role.

“Monsieur le Comte,” said Anselme, in tones of abject self-effacement, “I had never dared intrude had the matter been of less urgency. But Madame the Dowager of Condillac is below. She begs to see Your Excellency instantly.”