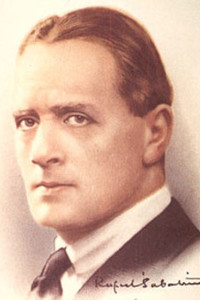 Rafael Sabatini was an Italian/British writer of novels of romance and adventure. He wrote short stories in the 1890s, and his first novel came out in 1902. It took Sabatini roughly a quarter of a century of hard work before he attained success with Scaramouche in 1921. This brilliant novel of the French Revolution became an international best-seller. It was followed by the equally successful Captain Blood in 1922. All of his earlier books were rushed into reprints, the most popular of which was The Sea Hawk from 1915. Sabatini was a prolific writer; he produced a new book approximately every year. While he perhaps didn’t achieve the mammoth success of Scaramouche and Captain Blood, nonetheless Sabatini still maintained a great deal of popularity with the reading public through the decades that followed. The public knew that in picking up a Sabatini book, they could always count upon a good read, and his following was loyal and extensive. (source: Wikipedia)

Set against a backdrop of pre-Renaissance Italy (a larger than life time, with swaggering condottieri, Machiavellian plotting, and high stakes in politi...read more »

Peter Blood, a physician and English gentleman, turned pirate out of a rankling sense of injustice. Barely escaping the gallows after his arrest for tre...read more »

Further adventures from the much-loved Captain Blood, the ‘Robin Hood’ of the Spanish Seas. His latest exploits take him to new adventures with as much ...read more »

A novel filled with living characters and the clash of swords and laid in the picturesque fifteenth century. At the age of twenty-eight, Colombino had b...read more »

London 1665 is no place for Randal Holles, a former soldier in Cromwell’s army, now that the monarchy has been restored and the exploits of the Republic...read more »

Get set for a rip-roaring yarn. Set in early modern Italy, Love-At-Arms skillfully combines all of the elements that have won Rafael Sabatini’s work a w...read more »

The classic action-adventure romance Mistress Wilding offers something for every Rafael Sabatini fan. Set amidst the turmoil of King James’ reign, the t...read more »

When the aristocratic Lord of La Tour d’Azyr murders Andre-Louis’s best friend - a young man who is politically active during the French Revolution - An...read more »

Another adventure from Sabatini’s remarkable and much-loved hero. In Scaramouche the Kingmaker, Andre Louis again dons his famous and much-admired disgu...read more »

Martin Marie Rigobert de Ganache had far too many important things to do than worry about the plight of an endangered heiress. But as he and the unfortu...read more »

A magnificent romantic saga in which the dauntless Captain Blood leads his men in daring treachery, foils the insidious Lady Court, and rescues the beau...read more »

When Don Pedro is shipwrecked and captured by the formidable Lady Margaret Trevanion, he doesn’t expect is to fall in love and run away with her. And he...read more »

King James I, narrowly escaping assassination in the infamous Gunpowder Plot, has reason to suspect all around him. But surely he can trust members of h...read more »

Though best known for sweeping historical epics such as Scaramouche and the Captain Blood series, Rafael Sabatini also dabbled in nonfiction from time t...read more »

Since childhood and his mother’s cruel death, young Caryll had been bred in France by his guardians for one purpose—to wreak their vengeance on the fath...read more »

Raphael Sabatini’s classic tale of nautical adventure set in the late 16th century is the story of Sir Oliver Tressilian who is villainously betrayed by...read more »

Take a trip to the distant past with this majestic epic from Rafael Sabatini, regarded as one of the masters of the historical action-adventure genre. S...read more »

Adapted from Sabatini’s long story, The Lust of Conquest, which appeared in the collection The Justice of the Duke. Like Sabatini’s other work on Cesare...read more »

Monsieur le Vicomte is a remarkable man - not least because, for all concerned, he had been guillotined along with numerous French aristocrats. Yet by s...read more »