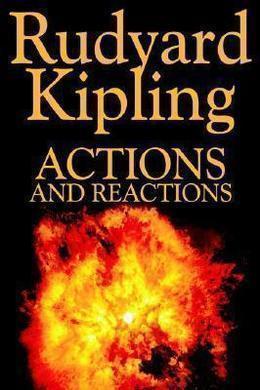 Imagine an alternate reality where the man who gave the world The Jungle Book and Gunga Din and The Phantom ‘Rickshaw was a science fiction writer – generations before Hugo Gernsbeck and Amazing; before the pulp SF that dominated the thirties; before intellectually prescient Astounding in the forties and sophisticated literary SF magazines like Galaxy and The Magazine Of Fantasy And Science Fiction fifties. Think of it: a world where Rudyard Kipling was a science fiction writer, long before SF as we understand it was invented. Well actually, he was. And the book you have in your hands – Actions And Reactions – is a wonderful example of it. It feels a lot like the sort of sophisticated SF – literary without being precious – we all remember from the Golden Age of Galaxy and The Magazine Of Fantasy And Science Fiction. Imagine that. We live in an alternate universe.

It came without warning, at the very hour his hand was outstretched to crumple the Holz and Gunsberg Combine. The New York doctors called it overwork, and he lay in a darkened room, one ankle crossed above the other, tongue pressed into palate, wondering whether the next brain-surge of prickly fires would drive his soul from all anchorages. At last they gave judgment. With care he might in two years return to the arena, but for the present he must go across the water and do no work whatever. He accepted the terms. It was capitulation; but the Combine that had shivered beneath his knife gave him all the honours of war: Gunsberg himself, full of condolences, came to the steamer and filled the Chapins’ suite of cabins with overwhelming flower-works.

“Smilax,” said George Chapin when he saw them. “Fitz is right. I’m dead; only I don’t see why he left out the ‘In Memoriam’ on the ribbons!”

“Nonsense!” his wife answered, and poured him his tincture. “You’ll be back before you can think.”

He looked at himself in the mirror, surprised that his face had not been branded by the hells of the past three months. The noise of the decks worried him, and he lay down, his tongue only a little pressed against his palate.

An hour later he said: “Sophie, I feel sorry about taking you away from everything like this. I–I suppose we’re the two loneliest people on God’s earth to-night.”

Said Sophie his wife, and kissed him: “Isn’t it something to you that we’re going together?”

They drifted about Europe for months–sometimes alone, sometimes with chance met gipsies of their own land. From the North Cape to the Blue Grotto at Capri they wandered, because the next steamer headed that way, or because some one had set them on the road. The doctors had warned Sophie that Chapin was not to take interest even in other men’s interests; but a familiar sensation at the back of the neck after one hour’s keen talk with a Nauheimed railway magnate saved her any trouble. He nearly wept.

“Let’s call it a honeymoon,” said Sophie. “D’ you know, in all the six years we’ve been married, you’ve never told me what you meant to do with your life?”

“With my life? What’s the use? It’s finished now.” Sophie looked up quickly from the Bay of Naples. “As far as my business goes, I shall have to live on my rents like that architect at San Moritz.”

“You’ll get better if you don’t worry; and even if it rakes time, there are worse things than–How much have you?”

“Between four and five million. But it isn’t the money. You know it isn’t. It’s the principle. How could you respect me? You never did, the first year after we married, till I went to work like the others. Our tradition and upbringing are against it. We can’t accept those ideals.”

“Well, I suppose I married you for some sort of ideal,” she answered, and they returned to their forty-third hotel.

In England they missed the alien tongues of Continental streets that reminded them of their own polyglot cities. In England all men spoke one tongue, speciously like American to the ear, but on cross-examination unintelligible.

“Ah, but you have not seen England,” said a lady with iron-grey hair. They had met her in Vienna, Bayreuth, and Florence, and were grateful to find her again at Claridge’s, for she commanded situations, and knew where prescriptions are most carefully made up. “You ought to take an interest in the home of our ancestors as I do.”

“I’ve tried for a week, Mrs. Shonts,” said Sophie, “but I never get any further than tipping German waiters.”

“These men are not the true type,” Mrs. Shouts went on. “I know where you should go.”

Chapin pricked up his ears, anxious to run anywhere from the streets on which quick men, something of his kidney, did the business denied to him.

“We hear and we obey, Mrs. Shonts,” said Sophie, feeling his unrest as he drank the loathed British tea.

Mrs. Shonts smiled, and took them in hand. She wrote widely and telegraphed far on their behalf till, armed with her letter of introduction, she drove them into that wilderness which is reached from an ash-barrel of a station called Charing Cross. They were to go to Rockett’s–the farm of one Cloke, in the southern counties–where, she assured them, they would meet the genuine England of folklore and song.