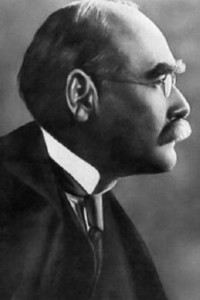 Rudyard Kipling was an English author and poet, born in Bombay, India, and is best known for The Jungle Book series and is regarded as a major “innovator in the art of the short story”; his children’s books are enduring classics of children’s literature. Kipling was one of the most popular writers in English, in both prose and verse, in the late 19th and early 20th centuries. In 1907, he was awarded the Nobel Prize in Literature, making him the first English language writer to receive the prize, and he remains its youngest-ever recipient.

However, later in life Kipling also came to be seen (in George Orwell’s words) as a “prophet of British imperialism.” Many saw prejudice and militarism in his works, and the resulting controversy about him continued for much of the 20th century. According to critic Douglas Kerr: “He is still an author who can inspire passionate disagreement and his place in literary and cultural history is far from settled. But as the age of the European empires recedes, he is recognized as an incomparable, if controversial, interpreter of how empire was experienced. That, and an increasing recognition of his extraordinary narrative gifts, make him a force to be reckoned with.”

Kipling kept writing until the early 1930s and died of a brain haemorrhage in January of 1936 at the age of 70. (source: Wikipedia)

Imagine an alternate reality where the man who gave the world The Jungle Book and Gunga Din and The Phantom ‘Rickshaw was a science fiction writer – gen...read more »

The Barrack-Room Ballads are a set of martial songs and poems by Rudyard Kipling originally published in two parts: the first set in 1892, the second in...read more »

Harvey Cheyne, spoiled millionaire’s son, tumbles overboard from a luxury liner–only to be rescued by the crew of a Gloucester schooner. Thus begins the...read more »

Kipling was reported missing, believed killed, in his first battle on the Western Front. From this time he was constantly in pain from a gastric ulcer. ...read more »

This collection of notes and essays on Kipling’s world travels reveals a man bursting with self-deprecating wit, keen observational powers, and an intel...read more »

The stories in this collection capture the varied scents and colours of India in the days of the Raj. Magic and religion, art and life, politics and soc...read more »

The famous, funny, and inspiring stories of creation as readers have never heard them before. From the tale of how the leopard got his spots to the crab...read more »

Rudyard Kipling has been attacked for championing British imperialism and celebrated for satirizing it. In fact, he did both. Nowhere does he express hi...read more »

Set and published during the time of the British Raj, a time of subalterns and tea planters, the 40 stories in Plain Tales From The Hills are played out...read more »

Soldiers Three is a collection of short stories by Rudyard Kipling. The three soldiers of the title are Learoyd, Mulvaney and Ortheris, who had also app...read more »

The Day’s Work I by Rudyard Kipling is a collection of short stories featuring mostly non-humans as main characters of each story. It contains some of K...read more »

No child should be allowed to grow up without reading The Jungle Books. These stories crackle with as much life and intensity as ever. Rudyard Kipling p...read more »

The Light That Failed is a haunting and powerful novel of human suffering, love and loss. In Dick Heldar, artist and journalist, we see a man struggling...read more »

Two former British soldiers who were sent in the early 19th century to British controlled India to search for adventure end up becoming kings of Kafiris...read more »

The Phantom Rickshaw &amp; Other Eerie Tales brings together four of Kipling’s most-loved short stories. Each deals with events that can’t quite be expl...read more »

Mowgli was once the little man-cub raised by Mother Wolf. Now Mowgli is the Jungle Lord ruling over the elephant and the panther, the python and the cro...read more »

Having achieved international fame with The Jungle Book, Captains Courageous, Kim, and his Just So Stories, in 1905 Kipling serialized a thrilling scien...read more »