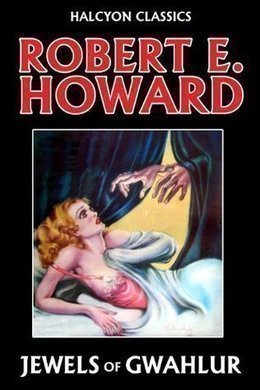 The Teeth of Gwahlur are legendary jewels, kept in an abandoned city in the country of Keshan. Conan, following legends of this treasure, has travelled to the lost city, where supernatural gives way to intrigue. In far Keshan, Conan has come to the abandoned city of Gwahlur in search of its famed riches. But the priests of Keshan are searching there too, and the penalty for profaning the ancient city is a slow, horrible death…

The cliffs rose sheer from the jungle, towering ramparts of stone that glinted jade-blue and dull crimson in the rising sun, and curved away and away to east and west above the waving emerald ocean of fronds and leaves. It looked insurmountable, that giant palisade with its sheer curtains of solid rock in which bits of quartz winked dazzlingly in the sunlight. But the man who was working his tedious way upward was already halfway to the top.

He came of a race of hillmen, accustomed to scaling forbidding crags, and he was a man of unusual strength and agility. His only garment was a pair of short red silk breeks, and his sandals were slung to his back, out of his way, as were his sword and dagger.

The man was powerfully built, supple as a panther. His skin was bronzed by the sun, his square-cut black mane confined by a silver band about his temples. His iron muscles, quick eyes and sure feet served him well here, for it was a climb to test these qualities to the utmost. A hundred and fifty feet below him waved the jungle. An equal distance above him the rim of the cliffs was etched against the morning sky.

He labored like one driven by the necessity of haste; yet he was forced to move at a snail’s pace, clinging like a fly on a wall. His groping hands and feet found niches and knobs, precarious holds at best, and sometimes he virtually hung by his finger nails. Yet upward he went, clawing, squirming, fighting for every foot. At times he paused to rest his aching muscles, and, shaking the sweat out of his eyes, twisted his head to stare searchingly out over the jungle, combing the green expanse for any trace of human life or motion.

Now the summit was not far above him, and he observed, only a few feet above his head, a break in the sheer stone of the cliff. An instant later he had reached it–a small cavern, just below the edge of the rim. As his head rose above the lip of its floor, he grunted. He clung there, his elbows hooked over the lip. The cave was so tiny that it was little more than a niche cut in the stone, but held an occupant. A shriveled mummy, cross-legged, arms folded on the withered breast upon which the shrunken head was sunk, sat in the little cavern. The limbs were bound in place with rawhide thongs which had become mere rotted wisps. If the form had ever been clothed, the ravages of time had long ago reduced the garments to dust. But thrust between the crossed arms and the shrunken breast there was a roll of parchment, yellowed with age to the color of old ivory.

The climber stretched forth a long arm and wrenched away this cylinder. Without investigation he thrust it into his girdle and hauled himself up until he was standing in the opening of the niche. A spring upward and he caught the rim of the cliffs and pulled himself up and over almost with the same motion.

There he halted, panting, and stared downward.

It was like looking into the interior of a vast bowl, rimmed by a circular stone wall. The floor of the bowl was covered with trees and denser vegetation, though nowhere did the growth duplicate the jungle denseness of the outer forest. The cliffs marched around it without a break and of uniform height. It was a freak of nature, not to be paralleled, perhaps, in the whole world: a vast natural amphitheater, a circular bit of forested plain, three or four miles in diameter, cut off from the rest of the world, and confined within the ring of those palisaded cliffs.

But the man on the cliffs did not devote his thoughts to marveling at the topographical phenomenon. With tense eagerness he searched the tree-tops below him, and exhaled a gusty sigh when he caught the glint of marble domes amidst the twinkling green. It was no myth, then; below him lay the fabulous and deserted palace of Alkmeenon.

Conan the Cimmerian, late of the Baracha Isles, of the Black Coast, and of many other climes where life ran wild, had come to the kingdom of Keshan following the lure of a fabled treasure that outshone the hoard of the Turanian kings.

Keshan was a barbaric kingdom lying in the eastern hinterlands of Kush where the broad grasslands merge with the forests that roll up from the south. The people were a mixed race, a dusky nobility ruling a population that was largely pure negro. The rulers–princes and high priests–claimed descent from a white race which, in a mythical age, had ruled a kingdom whose capital city was Alkmeenon. Conflicting legends sought to explain the reason for that race’s eventual downfall, and the abandonment of the city by the survivors. Equally nebulous were the tales of the Teeth of Gwahlur, the treasure of Alkmeenon. But these misty legends had been enough to bring Conan to Keshan, over vast distances of plain, river-laced jungle, and mountains.