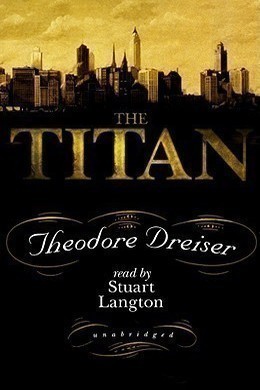 In this sequel to Dreiser’s novel The Financier, the author continues his exploration of the social and economic forces at play in the rise of the new class of super-rich capitalists in early twentieth-century America. Protagonist Frank Cowperwood attempts to leave his shameful past behind and settles in Chicago with his new wife. Will this quintessentially American act of self-reinvention succeed?

When Frank Algernon Cowperwood emerged from the Eastern District Penitentiary in Philadelphia he realized that the old life he had lived in that city since boyhood was ended. His youth was gone, and with it had been lost the great business prospects of his earlier manhood. He must begin again.

It would be useless to repeat how a second panic following upon a tremendous failure–that of Jay Cooke & Co.–had placed a second fortune in his hands. This restored wealth softened him in some degree. Fate seemed to have his personal welfare in charge. He was sick of the stock-exchange, anyhow, as a means of livelihood, and now decided that he would leave it once and for all. He would get in something else–street-railways, land deals, some of the boundless opportunities of the far West. Philadelphia was no longer pleasing to him. Though now free and rich, he was still a scandal to the pretenders, and the financial and social world was not prepared to accept him. He must go his way alone, unaided, or only secretly so, while his quondam friends watched his career from afar. So, thinking of this, he took the train one day, his charming mistress, now only twenty-six, coming to the station to see him off. He looked at her quite tenderly, for she was the quintessence of a certain type of feminine beauty.

“By-by, dearie,” he smiled, as the train-bell signaled the approaching departure. “You and I will get out of this shortly. Don’t grieve. I’ll be back in two or three weeks, or I’ll send for you. I’d take you now, only I don’t know how that country is out there. We’ll fix on some place, and then you watch me settle this fortune question. We’ll not live under a cloud always. I’ll get a divorce, and we’ll marry, and things will come right with a bang. Money will do that.”

He looked at her with his large, cool, penetrating eyes, and she clasped his cheeks between her hands.

She followed him with adoring eyes–a fool of love, a spoiled child, a family pet, amorous, eager, affectionate, the type so strong a man would naturally like–she tossed her pretty red gold head and waved him a kiss. Then she walked away with rich, sinuous, healthy strides–the type that men turn to look after.

“That’s her–that’s that Butler girl,” observed one railroad clerk to another. “Gee! a man wouldn’t want anything better than that, would he?”

It was the spontaneous tribute that passion and envy invariably pay to health and beauty. On that pivot swings the world.

Never in all his life until this trip had Cowperwood been farther west than Pittsburg. His amazing commercial adventures, brilliant as they were, had been almost exclusively confined to the dull, staid world of Philadelphia, with its sweet refinement in sections, its pretensions to American social supremacy, its cool arrogation of traditional leadership in commercial life, its history, conservative wealth, unctuous respectability, and all the tastes and avocations which these imply. He had, as he recalled, almost mastered that pretty world and made its sacred precincts his own when the crash came. Practically he had been admitted. Now he was an Ishmael, an ex-convict, albeit a millionaire. But wait! The race is to the swift, he said to himself over and over. Yes, and the battle is to the strong. He would test whether the world would trample him under foot or no.

Chicago, when it finally dawned on him, came with a rush on the second morning. He had spent two nights in the gaudy Pullman then provided–a car intended to make up for some of the inconveniences of its arrangements by an over-elaboration of plush and tortured glass–when the first lone outposts of the prairie metropolis began to appear. The side-tracks along the road-bed over which he was speeding became more and more numerous, the telegraph-poles more and more hung with arms and strung smoky-thick with wires. In the far distance, cityward, was, here and there, a lone working-man’s cottage, the home of some adventurous soul who had planted his bare hut thus far out in order to reap the small but certain advantage which the growth of the city would bring.