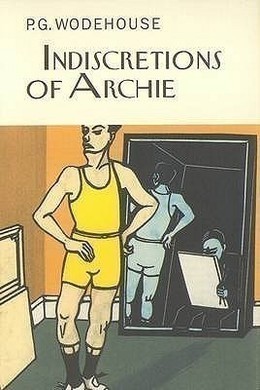 It wasn’t Archie’s fault really. It’s true he went to America and fell in love with Lucille, the daughter of a millionaire hotel proprietor and if he did marry her–well, what else was there to do? From his point of view, the whole thing was a thoroughly good egg; but Mr. Brewster, his father-in-law, thought differently, Archie had neither money nor occupation, which was distasteful in the eyes of the industrious Mr. Brewster; but the real bar was the fact that he had once adversely criticised one of his hotels. Archie does his best to heal the breach; but, being something of an ass, genus priceless, he finds it almost beyond his powers to placate ‘the man-eating fish’ whom Providence has given him as a father-in-law.

“Sir?” replied the desk-clerk alertly. All the employes of the Hotel Cosmopolis were alert. It was one of the things on which Mr. Daniel Brewster, the proprietor, insisted. And as he was always wandering about the lobby of the hotel keeping a personal eye on affairs, it was never safe to relax.

“I want to see the manager.”

“Is there anything I could do, sir?”

Archie looked at him doubtfully.

“Well, as a matter of fact, my dear old desk-clerk,” he said, “I want to kick up a fearful row, and it hardly seems fair to lug you into it. Why you, I mean to say? The blighter whose head I want on a charger is the bally manager.”

At this point a massive, grey-haired man, who had been standing close by, gazing on the lobby with an air of restrained severity, as if daring it to start anything, joined in the conversation.

His eye was cold and hostile. Others, it seemed to say, might like Archie Moffam, but not he. Daniel Brewster was bristling for combat. What he had overheard had shocked him to the core of his being. The Hotel Cosmopolis was his own private, personal property, and the thing dearest to him in the world, after his daughter Lucille. He prided himself on the fact that his hotel was not like other New York hotels, which were run by impersonal companies and shareholders and boards of directors, and consequently lacked the paternal touch which made the Cosmopolis what it was. At other hotels things went wrong, and clients complained. At the Cosmopolis things never went wrong, because he was on the spot to see that they didn’t, and as a result clients never complained. Yet here was this long, thin, string-bean of an Englishman actually registering annoyance and dissatisfaction before his very eyes.

“What is your complaint?” he enquired frigidly.

Archie attached himself to the top button of Mr. Brewster’s coat, and was immediately dislodged by an irritable jerk of the other’s substantial body.

“Listen, old thing! I came over to this country to nose about in search of a job, because there doesn’t seem what you might call a general demand for my services in England. Directly I was demobbed, the family started talking about the Land of Opportunity and shot me on to a liner. The idea was that I might get hold of something in America–”

He got hold of Mr. Brewster’s coat-button, and was again shaken off.

“Between ourselves, I’ve never done anything much in England, and I fancy the family were getting a bit fed. At any rate, they sent me over here–”

Mr. Brewster disentangled himself for the third time.

“I would prefer to postpone the story of your life,” he said coldly, “and be informed what is your specific complaint against the Hotel Cosmopolis.”

“Of course, yes. The jolly old hotel. I’m coming to that. Well, it was like this. A chappie on the boat told me that this was the best place to stop at in New York–”

“He was quite right,” said Mr. Brewster.

“Was he, by Jove! Well, all I can say, then, is that the other New York hotels must be pretty mouldy, if this is the best of the lot! I took a room here last night,” said Archie quivering with self-pity, “and there was a beastly tap outside somewhere which went drip-drip-drip all night and kept me awake.”

Mr. Brewster’s annoyance deepened. He felt that a chink had been found in his armour. Not even the most paternal hotel-proprietor can keep an eye on every tap in his establishment.

“Drip-drip-drip!” repeated Archie firmly. “And I put my boots outside the door when I went to bed, and this morning they hadn’t been touched. I give you my solemn word! Not touched.”

“But I wanted them cleaned, dash it!”

“There is a shoe-shining parlour in the basement. At the Cosmopolis shoes left outside bedroom doors are not cleaned.”

“Then I think the Cosmopolis is a bally rotten hotel!”

Mr. Brewster’s compact frame quivered. The unforgivable insult had been offered. Question the legitimacy of Mr. Brewster’s parentage, knock Mr. Brewster down and walk on his face with spiked shoes, and you did not irremediably close all avenues to a peaceful settlement. But make a remark like that about his hotel, and war was definitely declared.

“In that case,” he said, stiffening, “I must ask you to give up your room.”

“I’m going to give it up! I wouldn’t stay in the bally place another minute.”

Mr. Brewster walked away, and Archie charged round to the cashier’s desk to get his bill. It had been his intention in any case, though for dramatic purposes he concealed it from his adversary, to leave the hotel that morning. One of the letters of introduction which he had brought over from England had resulted in an invitation from a Mrs. van Tuyl to her house-party at Miami, and he had decided to go there at once.