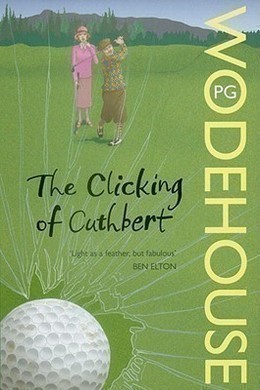 The Clicking of Cuthbert

Wodehouse’s brilliant but human brand of humor is perfectly suited to these stories of love, rivalry, revenge, and fulfillment on the links. While the Oldest Member sits in the clubhouse quoting Marcus Aurelius on patience and wisdom, outside on the green the fiercest human passions burn. All kinds of human life are here, from the cocky professional Sandy McHoots to the shy Ramsden Waters, whose only consolation is golf. And then, of course, there is the young, handsome Cuthbert Banks, whoplus four on the Wood Hills linkscannot seem to win the affections of the girl who has won his heart.

The young man came into the smoking-room of the clubhouse, and flung his bag with a clatter on the floor. He sank moodily into an arm-chair and pressed the bell.

The young man pointed at the bag with every evidence of distaste.

“You may have these clubs,” he said. “Take them away. If you don’t want them yourself, give them to one of the caddies.”

Across the room the Oldest Member gazed at him with a grave sadness through the smoke of his pipe. His eye was deep and dreamy–the eye of a man who, as the poet says, has seen Golf steadily and seen it whole.

“You are giving up golf?” he said.

He was not altogether unprepared for such an attitude on the young man’s part: for from his eyrie on the terrace above the ninth green he had observed him start out on the afternoon’s round and had seen him lose a couple of balls in the lake at the second hole after taking seven strokes at the first.

“Yes!” cried the young man fiercely. “For ever, dammit! Footling game! Blanked infernal fat-headed silly ass of a game! Nothing but a waste of time.”

“But I do say it. What earthly good is golf? Life is stern and life is earnest. We live in a practical age. All round us we see foreign competition making itself unpleasant. And we spend our time playing golf! What do we get out of it? Is golf any use? That’s what I’m asking you. Can you name me a single case where devotion to this pestilential pastime has done a man any practical good?”

“I could name a thousand.”

“I will select,” said the Sage, “from the innumerable memories that rush to my mind, the story of Cuthbert Banks.”

“Never heard of him.”

“Be of good cheer,” said the Oldest Member. “You are going to hear of him now.”