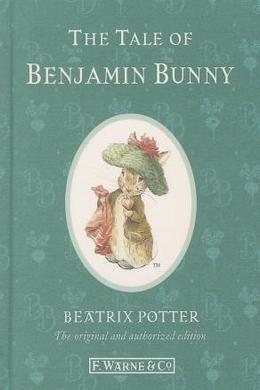 The Tale of Benjamin Bunny

The Tale of Benjamin Bunny is a children’s book written and illustrated by the famous author of children’s stories: Beatrix Potter: The book is a sequel to The Tale of Peter Rabbit, and tells of Peter’s return to Mr. McGregor’s garden with his cousin Benjamin to retrieve the clothes he lost there during his previous adventure.

One morning a little rabbit sat on a bank.

He pricked his ears and listened to the trit-trot, trit-trot of a pony.

A gig was coming along the road; it was driven by Mr. McGregor, and beside him sat Mrs. McGregor in her best bonnet.

As soon as they had passed, little Benjamin Bunny slid down into the road, and set off–with a hop, skip, and a jump–to call upon his relations, who lived in the wood at the back of Mr. McGregor’s garden.

That wood was full of rabbit holes; and in the neatest, sandiest hole of all lived Benjamin’s aunt and his cousins–Flopsy, Mopsy, Cotton-tail, and Peter.

Old Mrs. Rabbit was a widow; she earned her living by knitting rabbit-wool mittens and muffatees (I once bought a pair at a bazaar). She also sold herbs, and rosemary tea, and rabbit-tobacco (which is what we call lavender).

Little Benjamin did not very much want to see his Aunt.

He came round the back of the fir-tree, and nearly tumbled upon the top of his Cousin Peter.

Peter was sitting by himself. He looked poorly, and was dressed in a red cotton pocket-handkerchief.

“Peter,” said little Benjamin, in a whisper, “who has got your clothes?”

Peter replied, “The scarecrow in Mr. McGregor’s garden,” and described how he had been chased about the garden, and had dropped his shoes and coat.

Little Benjamin sat down beside his cousin and assured him that Mr. McGregor had gone out in a gig, and Mrs. McGregor also; and certainly for the day, because she was wearing her best bonnet.

Peter said he hoped that it would rain.

At this point old Mrs. Rabbit’s voice was heard inside the rabbit hole, calling: “Cotton-tail! Cotton-tail! fetch some more camomile!”

Peter said he thought he might feel better if he went for a walk.

They went away hand in hand, and got upon the flat top of the wall at the bottom of the wood. From here they looked down into Mr. McGregor’s garden. Peter’s coat and shoes were plainly to be seen upon the scarecrow, topped with an old tam-o’-shanter of Mr. McGregor’s.

Little Benjamin said: “It spoils people’s clothes to squeeze under a gate; the proper way to get in is to climb down a pear-tree.”

Peter fell down head first; but it was of no consequence, as the bed below was newly raked and quite soft.

It had been sown with lettuces.