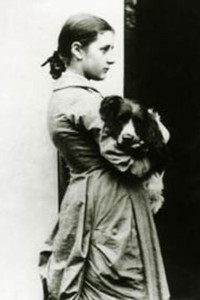 Helen Beatrix Potter was an English author, illustrator, mycologist and conservationist who was best known for her many best-selling children’s books that featured animal characters, such as Peter Rabbit. In her thirties, Potter published the highly successful children’s book The Tale of Peter Rabbit, after which she began writing and illustrating children’s books full time. Having become financially independent of her parents, she was able to buy a farm in the Lake District.

Potter died in 1943, and left almost all of her property to her husband who, after his death in 1945, left it to The National Trust to preserve the beauty of the Lake District as she had known it and protect it from developers. (source: Wikipedia)

The Story of A Fierce Bad Rabbit was written especially for editor Harold Warne’s little daughter, Louie, who had told Beatrix that Peter was too good a...read more »

Because a mouse has teased Miss Moppet, that kitten thinks she will tease the mouse. This was intended for very young children. It recounts the tale of ...read more »

When the tailor becomes sick and cannot finish the waistcoat for the Mayor, the mice finish it for him.

The Tale of Benjamin Bunny is a children’s book written and illustrated by the famous author of children’s stories: Beatrix Potter: The book is a sequel...read more »

Looking for a quiet place to hide her eggs to hatch them herself, Jemima Puddle-duck encounters a gentleman fox who offers to host them at his home and ...read more »

Telling the story of two mice, Johnny Town-mouse and Timmy Willie. One is a town-mouse and one is a country-mouse, and when they end up in each other’s ...read more »

Jeremy Fisher is a frog that lives in a small house in the middle of the buttercups of the pond . Worn mackintosh and galoshes goes fishing with his rod...read more »

The Tale of Mrs Tiggy-Winkle tells the tale of a hidden home high in the hills. It is discovered one day by a little girl called Lucie, who is in search...read more »

The tale is about a badger called Tommy Brock and his neighbour Mr. Tod, a fox. Brock kidnaps the children of Benjamin Bunny and his wife Flopsy, and hi...read more »

The little Tom Kitten runs away from his mother up the chimney and, through a crack in the wall, he finds himself under the floor of the attic. Here he ...read more »

Squirrel Nutkin would rather ask an old owl riddles than gather nuts with theother squirrels. 27 illustrations to color.

The Flopsy Bunnies are six young rabbits, sons of Benjamin and Flopsy Bunny. One day, while they are eating some rotten vegetables in the garden of Mr. ...read more »

The Tale of the Pie and the Patty Pan features the houses, gardens and streets of the village of Sawrey, where Beatrix Potter lived, at Hill Top, her fi...read more »

Timmy Tiptoes and his wife Goody, are two squirrels gathering nuts for the winter and storing them in hollow trees. Wrongly suspected of stealing other ...read more »

The Tale of Tom Kitten is set in the cottage garden Beatrix created herself at Hill Top, the farm she owned near the village of Sawrey. Tom and his sist...read more »

A doll’s house is the delightful setting for this most hilarious tale.One day, when the house is empty, those two bad mice, Tom Thumb and his wife, Hunc...read more »