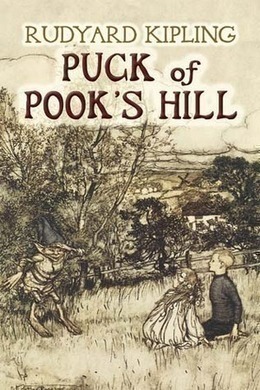 In the perfect bedtime reading, a mischievous imp called Puck delights two precocious youngsters with 10 magical fables about the hidden histories of Old England. Written especially for Kipling’s own children, each enchanting myth is followed by a selection of the master storyteller’s spirited poetry.

The children were at the Theatre, acting to Three Cows as much as they could remember of Midsummer Night’s Dream. Their father had made them a small play out of the big Shakespeare one, and they had rehearsed it with him and with their mother till they could say it by heart. They began when Nick Bottom the weaver comes out of the bushes with a donkey’s head on his shoulders, and finds Titania, Queen of the Fairies, asleep. Then they skipped to the part where Bottom asks three little fairies to scratch his head and bring him honey, and they ended where he falls asleep in Titania’s arms. Dan was Puck and Nick Bottom, as well as all three Fairies. He wore a pointy-eared cloth cap for Puck, and a paper donkey’s head out of a Christmas cracker–but it tore if you were not careful–for Bottom. Una was Titania, with a wreath of columbines and a foxglove wand.

The Theatre lay in a meadow called the Long Slip. A little mill-stream, carrying water to a mill two or three fields away, bent round one corner of it, and in the middle of the bend lay a large old Fairy Ring of darkened grass, which was the stage. The millstream banks, overgrown with willow, hazel, and guelder-rose, made convenient places to wait in till your turn came; and a grown-up who had seen it said that Shakespeare himself could not have imagined a more suitable setting for his play. They were not, of course, allowed to act on Midsummer Night itself, but they went down after tea on Midsummer Eve, when the shadows were growing, and they took their supper–hard-boiled eggs, Bath Oliver biscuits, and salt in an envelope–with them. Three Cows had been milked and were grazing steadily with a tearing noise that one could hear all down the meadow; and the noise of the Mill at work sounded like bare feet running on hard ground. A cuckoo sat on a gate-post singing his broken June tune, ‘cuckoo-cuk’, while a busy kingfisher crossed from the mill-stream, to the brook which ran on the other side of the meadow. Everything else was a sort of thick, sleepy stillness smelling of meadow-sweet and dry grass.

Their play went beautifully. Dan remembered all his parts–Puck, Bottom, and the three Fairies–and Una never forgot a word of Titania–not even the difficult piece where she tells the Fairies how to feed Bottom with ‘apricocks, green figs, and dewberries’, and all the lines end in ‘ies’. They were both so pleased that they acted it three times over from beginning to end before they sat down in the unthistly centre of the Ring to eat eggs and Bath Olivers. This was when they heard a whistle among the alders on the bank, and they jumped.

The bushes parted. In the very spot where Dan had stood as Puck they saw a small, brown, broad-shouldered, pointy-eared person with a snub nose, slanting blue eyes, and a grin that ran right across his freckled face. He shaded his forehead as though he were watching Quince, Snout, Bottom, and the others rehearsing Pyramus and Thisbe, and, in a voice as deep as Three Cows asking to be milked, he began:

‘What hempen homespuns have we swaggering here, So near the cradle of our fairy Queen?’

He stopped, hollowed one hand round his ear, and, with a wicked twinkle in his eye, went on:

The children looked and gasped. The small thing–he was no taller than Dan’s shoulder–stepped quietly into the Ring.

‘I’m rather out of practice,’ said he; ‘but that’s the way my part ought to be played.’

Still the children stared at him–from his dark-blue cap, like a big columbine flower, to his bare, hairy feet. At last he laughed.

‘Please don’t look like that. It isn’t my fault. What else could you expect?’ he said.

‘We didn’t expect any one,’ Dan answered, slowly. ‘This is our field.’

He pointed to the bare, fern-covered slope of Pook’s Hill that runs up from the far side of the mill-stream to a dark wood. Beyond that wood the ground rises and rises for five hundred feet, till at last you climb out on the bare top of Beacon Hill, to look over the Pevensey Levels and the Channel and half the naked South Downs.