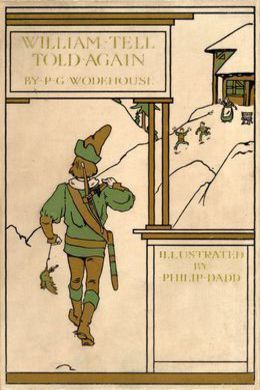 Wodehouse’s retelling of the William Tell legend in prose, verse and with illustrations. First published on November 11, 1904 by Adam & Charles Black, the main, prose element was written by P. G. Wodehouse, in typical Wodehousian style, while the 16 colour illustrations were by Philip Dadd and the accompanying verses by John W. Houghton.

Once upon a time, more years ago than anybody can remember, before the first hotel had been built or the first Englishman had taken a photograph of Mont Blanc and brought it home to be pasted in an album and shown after tea to his envious friends, Switzerland belonged to the Emperor of Austria, to do what he liked with.

One of the first things the Emperor did was to send his friend Hermann Gessler to govern the country. Gessler was not a nice man, and it soon became plain that he would never make himself really popular with the Swiss. The point on which they disagreed in particular was the question of taxes. The Swiss, who were a simple and thrifty people, objected to paying taxes of any sort. They said they wanted to spend their money on all kinds of other things. Gessler, on the other hand, wished to put a tax on everything, and, being Governor, he did it. He made everyone who owned a flock of sheep pay a certain sum of money to him; and if the farmer sold his sheep and bought cows, he had to pay rather more money to Gessler for the cows than he had paid for the sheep. Gessler also taxed bread, and biscuits, and jam, and buns, and lemonade, and, in fact, everything he could think of, till the people of Switzerland determined to complain. They appointed Walter Fürst, who had red hair and looked fierce; Werner Stauffacher, who had gray hair and was always wondering how he ought to pronounce his name; and Arnold of Melchthal, who had light-yellow hair and was supposed to know a great deal about the law, to make the complaint. They called on the Governor one lovely morning in April, and were shown into the Hall of Audience.

The other two pushed Walter Fürst forward because he looked fierce, and they thought he might frighten the Governor.

“That’s the way,” whispered Werner; “give it him!”

“Er–ahem!” said Walter Fürst again; “the fact is, your Governorship–”

“The fact is, your Excellency, it seems to the people of Switzerland–”

”–Whom I represent,” whispered Arnold of Melchthal.

”–Whom I represent, that things want changing.”

“The taxes, your excellent Governorship.”

“Change the taxes? Why, don’t the people of Switzerland think there are enough taxes?”

Arnold of Melchthal broke in hastily.

“I know, I know,” Gessler interrupted; “I know all the taxes. Come to the point. What about ‘em?”

“Well, your Excellency, there are too many of them.”

“Yes. And we are not going to put up with it any longer!” shouted Arnold of Melchthal.

Gessler leaned forward in his throne.

“Might I ask you to repeat that remark?” he said.

“We are not going to put up with it any longer!”

Gessler sat back again with an ugly smile.

“Oh,” he said–“oh, indeed! You aren’t, aren’t you! Desire the Lord High Executioner to step this way,” he added to a soldier who stood beside him.

The Lord High Executioner entered the presence. He was a kind-looking old gentleman with white hair, and he wore a beautiful black robe, tastefully decorated with death’s-heads.

“Your Excellency sent for me?” he said.

“Just so,” replied Gessler. “This gentleman here”–he pointed to Arnold of Melchthal–“says he does not like taxes, and that he isn’t going to put up with them any longer.”

“See what you can do for him.”

“Certainly, your Excellency. Robert,” he cried, “is the oil on the boil?”

“Just this minute boiled over,” replied a voice from the other side of the door.

“Then bring it in, and mind you don’t spill any.”

Enter Robert, in a suit of armour and a black mask, carrying a large caldron, from which the steam rose in great clouds.

“Now, sir, if you please,” said the executioner politely to Arnold of Melchthal.

Arnold looked at the caldron.

“It’s against the law to threaten a man with hot oil.”

“You may bring an action against me,” said the executioner. “Now, sir, if you please. We are wasting time. The forefinger of your left hand, if I may trouble you. Thank you. I am obliged.”

He took Arnold’s left hand, and dipped the tip of the first finger into the oil.