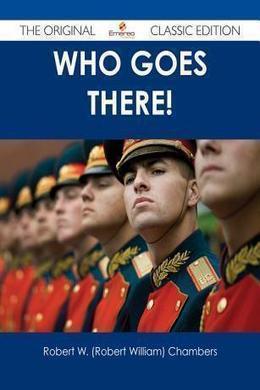 The Crown Prince is partly right; the majority in the world is against him and what he stands for; but not against Germany and the Germans.

They had selected for their business the outer face of an old garden wall. There were red tiles on the coping; dusty roadside vines half covered the base. Where plaster had peeled off a few weather-beaten bricks showed. Bees hummed in the trampled herbage.

Against this wall they backed the first six men. One, a mere boy, was crying, wiping his frightened eyes on his shirt-sleeve.

The dry crash of the volley ended the matter; all the men against the wall collapsed. Presently one of them, the boy who had been crying, moved his arm in the grass. A rifle spoke instantly, and he moved no more.

There came a low-spoken word of command, the firing squad shouldered rifles, wheeled, and moved off; and out of the sea-grey masses of infantry another squad of execution came marching up, smartly.

A dozen men, some in sabots, trousers, and dirty collarless shirts, some in well-cut business suits and straw hats, and all with their wrists tied behind them, stood silently awaiting their turns. One among them, a young man wearing a golf-cap, knickerbockers, heather-spats, and an absolutely colourless face, stood staring at the tumbled heaps of clothing along the foot of the wall as though stupified.

The emotionless and methodical preparations, the brisk precision of the operation, the cheerful celerity of the firing squad made it the more terrifying, stunning the victims to immobility.

The young man in the golf-cap and knickerbockers clenched his tied hands. Not an atom of colour remained in cheeks or lips, and he stood with face averted while the squad of execution was busy with its business.

There seemed to be some slight disorder along the wall–a defiant voice was raised hoarsely cursing all Germans; another, thin and hysterical, cheered for Belgium and the young King. Also this firing squad must have aimed badly, for bayonet and rifle-butt were used afterward and some delay occurred; and an officer, revolver swinging, prowled along the foot of the wall, kicking inquiringly at the dead heaps of heavy flesh that had collapsed there.

Houses lining the single village street began to leak smoke; smoke writhed and curled behind closed window-panes. Here and there a mounted Uhlan forced his big horse up on the sidewalk and drove his lance butt through the window glass.

Already the street was swimming in thin strata of smoke; the sea-grey uniforms of the German infantry seemed part of the haze; only the faces of the soldiery were visible–faces without bodies, thousands of flat, detached faces, thousands of little pig eyes set in a blank and foggy void. And over everything in the close, heavy air brooded the sour stench of a sweat-soaked, unwashed army.

A third squad of execution came swinging up, apparently out of nowhere, their heavy half-boots clumping in unison on the stony street.

The young man in the golf-cap and knickerbockers heard them coming and bit his bloodless lip.

After a moment the rhythm of the heavy boots ceased. The street became very silent, save where window glass continually fell tinkling to the sidewalk and the feathery whisper of flames became more audible from within the row of empty houses.

The young man lifted his eyes to the sombre and sunless sky. High up there above the mist and heavy bands of smoke he saw the feathery tops of tall trees, motionless.

Presently through the silence came the clatter of hoofs; Uhlans cantered past, pennons whipping from lance heads; then a soft two-toned bugle-call announced an automobile; and presently it loomed up, huge, through the parted ranks of the infantry, a great grey, low-purring bulk, slowing, halting, still purring.

A grey-clad general officer sat in the tonneau, a grey-uniformed hussar was seated beside the grey-liveried chauffeur.

As the car stopped several officers were already beside the running-board, halted stiffly at attention. The general officer, his cigar between his gloved fingers, leaned over the edge of the tonneau and said something in a very quiet voice.

Instantly a slim, stiff infantry captain saluted, wheeled sharply, and walked straight to the little file of prisoners who stood with their wrists tied behind their backs, looking vacantly at the automobile.

“Which is the prisoner-hostage who says he is American?” he snapped out in his nasal Prussian voice.

The young man who wore a golf-cap took a short step forward, hesitated.