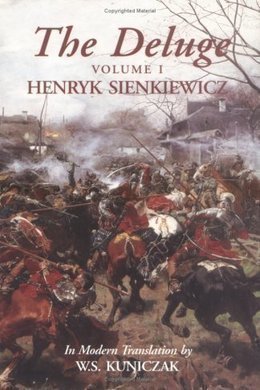 An Historical Novel of Poland, Sweden, and Russia

Split into two volumes due to length, this work is the sequel to With Fire and Sword, a massive book called one of the greatest in European literature. The Deluge continues the sweeping saga of war and rebellion that threatened the kingdom of Poland and changed the face of Eastern Europe in the 17th Century. This historical novel of Poland, Sweden and Russia, is a masterful blend of history and imagination, filled with nonstop action and adventure. Sienkiewicz’s work is the sweeping saga of a nation caught in the throes of a civil war, of a people struggling for survival, and of events that forever changed the face of Eastern Europe. Number two in his trilogy on the history of Poland, it tells the love story of a man and a woman tragically separated by foolishness, pride, confusion and the Swedish invation of Poland in the 1500s which divided a nation against itself and drew the best and worst out of its citizens

There was in Jmud a powerful family, the Billeviches, descended from Mendog, connected with many, and respected, beyond all, in the district of Rossyeni. The Billeviches had never risen to great offices, the highest they had filled were provincial; but in war they had rendered the country unsurpassed services, for which they were richly rewarded at various times. Their native nest, existing to this day, was called Billeviche; but they possessed many other estates, both in the neighborhood of Rossyeni and farther on toward Krakin, near Lauda, Shoi, Nyevyaja, and beyond Ponyevyej. In later times they branched out into a number of houses, the members of which lost sight of one another. They all assembled only when there was a census at Rossyeni of the general militia of Jmud on the plain of the invited Estates. They met also in part under the banners of the Lithuanian cavalry and at provincial diets; and because they were wealthy and influential, even the Radzivills, all powerful in Lithuania and Jmud, had to reckon with them.

In the reign of Yan Kazimir, the patriarch of all the Billeviches, was Heraclius, colonel of light-horse and under-chamberlain of Upita. He did not dwell in the ancestral nest, which was rented at that time by Tomash, the sword-bearer of Rossyeni; Heraclius Billevich owned also Vodokty, Lyubich, and Mitruny, situated near Lauda, surrounded, as if with a sea, by agriculturists of the petty nobility.

Besides the Billeviches there were only a few of the more considerable families in the neighborhood, such as the Sollohubs, the Montvills, the Schyllings, the Koryznis, the Sitsinskis,–though there was no lack of smaller nobility of these names; finally, the whole river region of Lauda was thickly studded with so-called “neighborhoods,” or, in common parlance, zastsianki, occupied by the nobility of Lauda, renowned and celebrated in the history of Jmud.

In other neighborhoods of the region the families took their names from the places, or the places from the families, as was customary in Podlyasye; but along the river region of Lauda it was different. In Morezi dwelt the Stakyans, whom Batory in his time settled there for bravery at Pskoff; in Volmontovichi, on good land, swarmed the Butryms, the bulkiest fellows in all Lauda, noted for few words and heavy hands,–men who in time of provincial diets, raids on property, or wars were wont to go in close rank and in silence. The lands in Drojeykani and Mozgi were managed by the numerous Domasheviches, famed hunters; these men tramped through the wilderness of Zyelonka as far as Wilkomir on bear-trails. The Gashtovts occupied Patsuneli; their women were famous for beauty, so that finally all pretty girls around Krakin, Ponyevyej, and Upita were known as Patsuneli girls. The Sollohubs Mali were rich in horses and excellent cattle, bred in forest pastures. The Gostsyeviches in Goshchuni made tar in the woods, from which occupation they were called Gostsyevichi Charni (Black) or Dymni (Smoky),–the Black or Smoky Gostsyeviches.

There were other villages and families also. The names of many of them are still extant; but these villages are not situated as before, and men call them by other names. Wars came too with misfortunes and fires, villages were not always rebuilt on the ruins; in a word, much has changed. But in that time old Lauda was still flourishing in its primeval estate; and the nobles had reached their highest repute a few years before, when, fighting at Loyovo against the uprisen Cossacks, they covered themselves with great glory under the lead of Yanush Radzivill.

All the Lauda men served in the regiment of old Heraclius Billevich,–the richer with two horses, the poorer with one, and the poorest as attendants. In general, these nobles were warlike, and especially enamoured of a knightly career; but in questions which formed the ordinary subjects of discussion at a provincial diet they were less skilled. They knew that there was a king in Warsaw; that Radzivill and Pan Hlebovich were starostas in Jmud, and Pan Billevich at Vodokty in Lauda. That was sufficient for them; and they voted as Pan Billevich instructed them, convinced that he wanted the same as Pan Hlebovich, and that the latter went hand in hand with Radzivill. Radzivill was the king’s arm in Lithuania and Jmud; the king was the consort of the Commonwealth, the father of the legion of nobles.

Pan Billevich was, in fact, a friend rather than a client of the powerful oligarchs in Birji, and a greatly esteemed one at that; for at every call he had a thousand voices and a thousand Lauda sabres,–and sabres in the hands of the Stakyans, the Butryms, the Domasheviches, or the Gashtovts were despised at that period by no man on earth. It was only later that everything changed, just at the time when Pan Heraclius Billevich was no more.