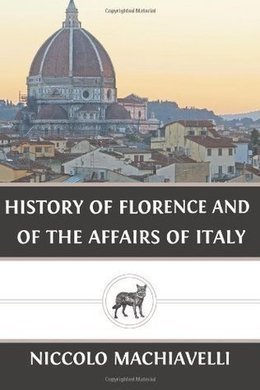 History of Florence and of the Affairs of Italy

History Of Florence And Of The Affairs Of Italy: From The Earliest Times To The Death Of Lorenzo The Magnificent. Florence is a major historical city in Italy, distinguished as one of the most outstanding economic, cultural, political and artistic centers in the peninsula from the late Middle Ages to the Renaissance. Machiavelli was an Italian historian, politician, diplomat, philosopher, humanist, and writer based in Florence during the Renaissance. He was for many years an official in the Florentine Republic, with responsibilities in diplomatic and military affairs.

The people who inhabit the northern parts beyond the Rhine and the Danube, living in a healthy and prolific region, frequently increase to such vast multitudes that part of them are compelled to abandon their native soil, and seek a habitation in other countries. The method adopted, when one of these provinces had to be relieved of its superabundant population, was to divide into three parts, each containing an equal number of nobles and of people, of rich and of poor. The third upon whom the lot fell, then went in search of new abodes, leaving the remaining two-thirds in possession of their native country.

These migrating masses destroyed the Roman empire by the facilities for settlement which the country offered when the emperors abandoned Rome, the ancient seat of their dominion, and fixed their residence at Constantinople; for by this step they exposed the western empire to the rapine of both their ministers and their enemies, the remoteness of their position preventing them either from seeing or providing for its necessities. To suffer the overthrow of such an extensive empire, established by the blood of so many brave and virtuous men, showed no less folly in the princes themselves than infidelity in their ministers; for not one irruption alone, but many, contributed to its ruin; and these barbarians exhibited much ability and perseverance in accomplishing their object.

The first of these northern nations that invaded the empire after the Cimbrians, who were conquered by Caius Marius, was the Visigoths–which name in our language signifies “Western Goths.” These, after some battles fought along its confines, long held their seat of dominion upon the Danube, with consent of the emperors; and although, moved by various causes, they often attacked the Roman provinces, were always kept in subjection by the imperial forces. The emperor Theodosius conquered them with great glory; and, being wholly reduced to his power, they no longer selected a sovereign of their own, but, satisfied with the terms which he granted them, lived and fought under his ensigns, and authority. On the death of Theodosius, his sons Arcadius and Honorius, succeeded to the empire, but not to the talents and fortune of their father; and the times became changed with the princes. Theodosius had appointed a governor to each of the three divisions of the empire, Ruffinus to the eastern, to the western Stilicho, and Gildo to the African. Each of these, after the death of Theodosius, determined not to be governors merely, but to assume sovereign dominion over their respective provinces. Gildo and Ruffinus were suppressed at their outset; but Stilicho, concealing his design, ingratiated himself with the new emperors, and at the same time so disturbed their government, as to facilitate his occupation of it afterward. To make the Visigoths their enemies, he advised that the accustomed stipend allowed to this people should be withheld; and as he thought these enemies would not be sufficient alone to disturb the empire, he contrived that the Burgundians, Franks, Vandals, and Alans (a northern people in search of new habitations), should assail the Roman provinces.

That they might be better able to avenge themselves for the injury they had sustained, the Visigoths, on being deprived of their subsidy, created Alaric their king; and having assailed the empire, succeeded, after many reverses, in overrunning Italy, and finally in pillaging Rome.

After this victory, Alaric died, and his successor, Astolphus, having married Placidia, sister of the emperors, agreed with them to go to the relief of Gaul and Spain, which provinces had been assailed by the Vandals, Burgundians, Alans, and Franks, from the causes before mentioned. Hence it followed, that the Vandals, who had occupied that part of Spain called Betica (now Andalusia), being pressed by the Visigoths, and unable to resist them, were invited by Boniface, who governed Africa for the empire, to occupy that province; for, being in rebellion, he was afraid his error would become known to the emperor. For these reasons the Vandals gladly undertook the enterprise, and under Genseric, their king, became lords of Africa.