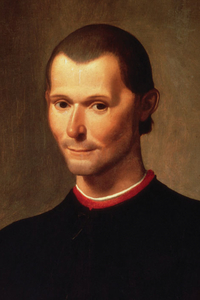 Niccolò di Bernardo dei Machiavelli was an Italian philosopher, writer, and is considered one of the main founders of modern political science. He was a diplomat, political philosopher, musician, and playwright, but, foremost, he was a civil servant of the Florentine Republic. In June of 1498, after the ouster and execution of Girolamo Savonarola, the Great Council elected Machiavelli as Secretary to the second Chancery of the Republic of Florence.

Like Leonardo da Vinci, Machiavelli is considered a typical example of the Renaissance Man. He is most famous for a short political treatise, The Prince, written in 1513, but not published until 1532, five years after Machiavelli’s death. Although he privately circulated The Prince among friends, the only work he published in his lifetime was The Art of War, about high-military science. Since the sixteenth century, generations of politicians remain attracted and repelled by the cynical approach to power posited in The Prince and his other works. Whatever his personal intentions, which are still debated today, his surname yielded the modern political word Machiavellianism—the use of cunning and deceitful tactics in politics. (source: Wikipedia)

The Discourses on the First Decade of Titus Livius is one of the masterpieces by Machiavelli. This work narrates the writer’s comments as to how a democ...read more »

History of Florence and of the Affairs of Italy (1526)

History Of Florence And Of The Affairs Of Italy: From The Earliest Times To The Death Of Lorenzo The Magnificent. Florence is a major historical city in...read more »

When Lorenzo de’ Medici seized control of the Florentine Republic in 1512, he summarily fired the Secretary to the Second Chancery of the Signoria and s...read more »