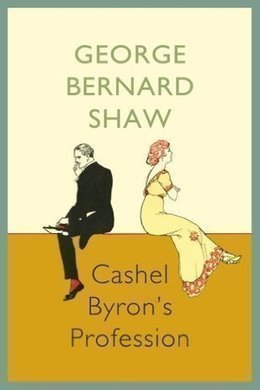 After poleaxing his mathematics master with a perfect right, Cashel Byron, the unloved son of a successful actress, runs away to Australia. He returns to England and becomes the most famous prizefighter of his age, only to be floored himself by the lovely and impossible Lydia Carew. Can Lydia, with her reputation for vast learning and exquisite culture, be wooed by the ruffian Cashel? Can Cashel successfully hide his illegal professional? And so follows, with Shaw’s inimitable wit and sparkle, a tale of miscommunication, drawing-room comedy and love.

Wiltstoken Castle was a square building with circular bastions at the corners, each bastion terminating skyward in a Turkish minaret. The southwest face was the front, and was pierced by a Moorish arch fitted with glass doors, which could be secured on occasion by gates of fantastically hammered iron. The arch was enshrined by a Palladian portico, which rose to the roof, and was surmounted by an open pediment, in the cleft of which stood a black-marble figure of an Egyptian, erect, and gazing steadfastly at the midday sun. On the ground beneath was an Italian terrace with two great stone elephants at the ends of the balustrade. The windows on the upper story were, like the entrance, Moorish; but the principal ones below were square bays, mullioned. The castle was considered grand by the illiterate; but architects and readers of books on architecture condemned it as a nondescript mixture of styles in the worst possible taste. It stood on an eminence surrounded by hilly woodland, thirty acres of which were enclosed as Wiltstoken Park. Half a mile south was the little town of Wiltstoken, accessible by rail from London in about two hours.

Most of the inhabitants of Wiltstoken were Conservatives. They stood in awe of the castle; and some of them would at any time have cut half a dozen of their oldest friends to obtain an invitation to dinner, or oven a bow in public, from Miss Lydia Carew, its orphan mistress. This Miss Carew was a remarkable person. She had inherited the castle and park from her aunt, who had considered her niece’s large fortune in railways and mines incomplete without land. So many other legacies had Lydia received from kinsfolk who hated poor relations, that she was now, in her twenty-fifth year, the independent possessor of an annual income equal to the year’s earnings of five hundred workmen, and under no external compulsion to do anything in return for it. In addition to the advantage of being a single woman in unusually easy circumstances, she enjoyed a reputation for vast learning and exquisite culture. It was said in Wiltstoken that she knew forty-eight living languages and all dead ones; could play on every known musical instrument; was an accomplished painter, and had written poetry. All this might as well have been true as far as the Wiltstokeners were concerned, since she knew more than they. She had spent her life travelling with her father, a man of active mind and bad digestion, with a taste for sociology, science in general, and the fine arts. On these subjects he had written books, by which he had earned a considerable reputation as a critic and philosopher. They were the outcome of much reading, observation of men and cities, sight-seeing, and theatre-going, of which his daughter had done her share, and indeed, as she grew more competent and he weaker and older, more than her share. He had had to combine health-hunting with pleasure-seeking; and, being very irritable and fastidious, had schooled her in self-control and endurance by harder lessons than those which had made her acquainted with the works of Greek and German philosophers long before she understood the English into which she translated them.

When Lydia was in her twenty-first year her father’s health failed seriously. He became more dependent on her; and she anticipated that he would also become more exacting in his demands on her time. The contrary occurred. One day, at Naples, she had arranged to go riding with an English party that was staying there. Shortly before the appointed hour he asked her to make a translation of a long extract from Lessing. Lydia, in whom self-questionings as to the justice of her father’s yoke had been for some time stirring, paused thoughtfully for perhaps two seconds before she consented. Carew said nothing, but he presently intercepted a servant who was bearing an apology to the English party, read the note, and went back to his daughter, who was already busy at Lessing.

“Lydia,” he said, with a certain hesitation, which she would have ascribed to shyness had that been at all credible of her father when addressing her, “I wish you never to postpone your business to literary trifling.”

She looked at him with the vague fear that accompanies a new and doubtful experience; and he, dissatisfied with his way of putting the case, added, “It is of greater importance that you should enjoy yourself for an hour than that my book should be advanced. Far greater!”

Lydia, after some consideration, put down her pen and said, “I shall not enjoy riding if there is anything else left undone.”

“I shall not enjoy your writing if your excursion is given up for it,” he said. “I prefer your going.”