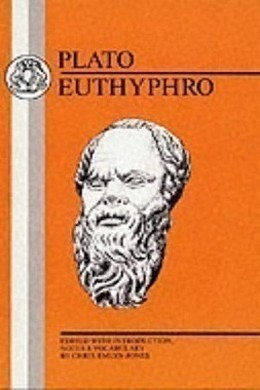 These four dialogues enact the trial and execution of Socrates, presenting a dialectical process that shows not only why the Athenians condemned him to death but, much more to the point, the reason why Socrates lived and devoted himself to examining the meaning of life. These works not only offer the best introduction to Plato’s way of doing philosophy but also serve as an excellent introduction to philosophy itself.

PERSONS OF THE DIALOGUE: Socrates, Euthyphro.

SCENE: The Porch of the King Archon.

EUTHYPHRO: Why have you left the Lyceum, Socrates? and what are you doing in the Porch of the King Archon? Surely you cannot be concerned in a suit before the King, like myself?

SOCRATES: Not in a suit, Euthyphro; impeachment is the word which the Athenians use.

EUTHYPHRO: What! I suppose that some one has been prosecuting you, for I cannot believe that you are the prosecutor of another.

EUTHYPHRO: Then some one else has been prosecuting you?

EUTHYPHRO: And who is he?

SOCRATES: A young man who is little known, Euthyphro; and I hardly know him: his name is Meletus, and he is of the deme of Pitthis. Perhaps you may remember his appearance; he has a beak, and long straight hair, and a beard which is ill grown.

EUTHYPHRO: No, I do not remember him, Socrates. But what is the charge which he brings against you?

SOCRATES: What is the charge? Well, a very serious charge, which shows a good deal of character in the young man, and for which he is certainly not to be despised. He says he knows how the youth are corrupted and who are their corruptors. I fancy that he must be a wise man, and seeing that I am the reverse of a wise man, he has found me out, and is going to accuse me of corrupting his young friends. And of this our mother the state is to be the judge. Of all our political men he is the only one who seems to me to begin in the right way, with the cultivation of virtue in youth; like a good husbandman, he makes the young shoots his first care, and clears away us who are the destroyers of them. This is only the first step; he will afterwards attend to the elder branches; and if he goes on as he has begun, he will be a very great public benefactor.

EUTHYPHRO: I hope that he may; but I rather fear, Socrates, that the opposite will turn out to be the truth. My opinion is that in attacking you he is simply aiming a blow at the foundation of the state. But in what way does he say that you corrupt the young?

SOCRATES: He brings a wonderful accusation against me, which at first hearing excites surprise: he says that I am a poet or maker of gods, and that I invent new gods and deny the existence of old ones; this is the ground of his indictment.

EUTHYPHRO: I understand, Socrates; he means to attack you about the familiar sign which occasionally, as you say, comes to you. He thinks that you are a neologian, and he is going to have you up before the court for this. He knows that such a charge is readily received by the world, as I myself know too well; for when I speak in the assembly about divine things, and foretell the future to them, they laugh at me and think me a madman. Yet every word that I say is true. But they are jealous of us all; and we must be brave and go at them.

SOCRATES: Their laughter, friend Euthyphro, is not a matter of much consequence. For a man may be thought wise; but the Athenians, I suspect, do not much trouble themselves about him until he begins to impart his wisdom to others, and then for some reason or other, perhaps, as you say, from jealousy, they are angry.

EUTHYPHRO: I am never likely to try their temper in this way.

SOCRATES: I dare say not, for you are reserved in your behaviour, and seldom impart your wisdom. But I have a benevolent habit of pouring out myself to everybody, and would even pay for a listener, and I am afraid that the Athenians may think me too talkative. Now if, as I was saying, they would only laugh at me, as you say that they laugh at you, the time might pass gaily enough in the court; but perhaps they may be in earnest, and then what the end will be you soothsayers only can predict.

EUTHYPHRO: I dare say that the affair will end in nothing, Socrates, and that you will win your cause; and I think that I shall win my own.

SOCRATES: And what is your suit, Euthyphro? are you the pursuer or the defendant?

EUTHYPHRO: I am the pursuer.

EUTHYPHRO: You will think me mad when I tell you.

SOCRATES: Why, has the fugitive wings?

EUTHYPHRO: Nay, he is not very volatile at his time of life.

SOCRATES: Who is he?

SOCRATES: Your father! my good man?

SOCRATES: And of what is he accused?

SOCRATES: By the powers, Euthyphro! how little does the common herd know of the nature of right and truth. A man must be an extraordinary man, and have made great strides in wisdom, before he could have seen his way to bring such an action.

EUTHYPHRO: Indeed, Socrates, he must.