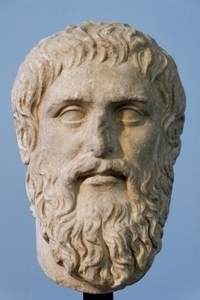 Plato was a philosopher, as well as mathematician, in Classical Greece and an influential figure in philosophy, central in Western philosophy. He was Socrates’ student, and founded the Academy in Athens, the first institution of higher learning in the Western world. Along with Socrates and his most-famous student, Aristotle, Plato helped to lay the foundations of Western philosophy and science. Alfred North Whitehead once noted: “the safest general characterization of the European philosophical tradition is that it consists of a series of footnotes to Plato.”

Plato’s philosophical ability is evident in his Socratic dialogues; thirty-six dialogues and thirteen letters have been ascribed to him, although 15–18 of are contested. Plato’s dialogues have been used to teach a range of subjects, including philosophy, logic, ethics, rhetoric, religion and mathematics. His other notable and influential work is the Theory of Forms which began a unique perspective on abstract objects, and lead to a school of thought called Platonism. Plato’s writings have been published in several fashions; this has led to several conventions regarding the naming and referencing of Plato’s texts. (source: Wikipedia)

The Apology is Plato’s version of the speech given by Socrates as he defended himself in 399 BCE against the charges of ‘corrupting the young, &amp; by ...read more »

Crito is a short but important dialogue by the ancient Greek philosopher Plato. It is a conversation between Socrates and his wealthy friend Crito regar...read more »

These four dialogues enact the trial and execution of Socrates, presenting a dialectical process that shows not only why the Athenians condemned him to ...read more »

The Phaedo is acknowledged to be one of Plato’s masterpieces, showing him both as a philosopher and as a dramatist at the height of his powers. For its ...read more »

The Republic is a Socratic dialogue by Plato, written in approximately 360 BC. It is one of the most influential works of philosophy and political theor...read more »