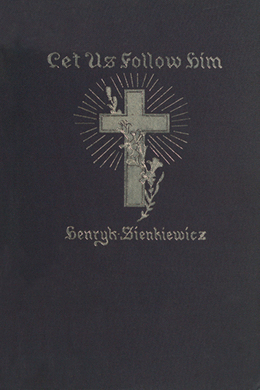 This story by Henryk Sienkiewicz, is of interest as it can be considered the germ, so to speak, of Quo Vadis, which is among one of the most noteworthy of novels and has won a large audience as well in Europe as in America. It is the tale of Cains Septimus Cunia, a Roman patrician, rich, splendid, luxury-loving; who, sated with the life of Rome, travels to Alexandria, and there loves and weds a beautiful woman — Autea, daughter of Timon the sage. The intense and all-possessing passion of Cunia for his wife revolutionizes his life and nature. Autea falls ill, and in the hope of cure they journey to Jerusalem, arriving on the eve of the Crucifixion. It is a strange, beautiful little story, full of suggestion and pictures, and of possibilities, with the peculiar charm of which Sienkiewicz only of his generation possesses the secret.

Caius Septimius Cinna was a Roman Patrician. He had spent his youth in the legions and in severe camp-life. Later he returned to Rome to enjoy glory, luxury, and a great though somewhat shattered fortune. He used and abused at that time everything which the gigantic city could offer.

His nights were spent at feasts in lordly suburban villas; his days in sword practice with fencers, in discussions with rhetors at the baths, where disputes were held, and where the scandal of the city and the world was related, in circuses, at races, at the struggles of gladiators, or among Greek musicians, Thracian soothsayers, and wonderful dancing-girls from the islands of the Archipelago. He inherited from the renowned Lucullus, a relative on the mother’s side, a love for exquisite dishes. At his table were served Grecian wines, Neapolitan oysters, Numidian mice, and locust fat preserved in honey from Pontus.

Whatever Rome possessed Cinna must have, beginning with fish of the Red Sea, and ending with white ptarmigans from the banks of the Borysthenes (Dnieper). He made use of things not only as a soldier run riot, but as a patrician who passes the measure. He had instilled into himself, or had perhaps even roused in himself, a love for the beautiful,–a love for statues rescued from the ruins of Corinth, for pitchers from Attica, for Etruscan vases from foggy Sericum, for Roman mosaics, for fabrics brought from the Euphrates, for Arabian perfumes, and for all the peculiar trifles which filled the void of patrician life.

He knew how to talk of these trifles, as a specialist and connoisseur, with toothless old men, who decked out their baldness in wreaths of roses when going to a feast, and who after the feast chewed heliotrope blossoms to make the breath of their lungs odoriferous. He felt also the beauty of Cicero’s periods, and of verses of Horace or Ovid.

Educated by an Athenian rhetor, he conversed in Greek fluently; he knew whole pages of the “Iliad” by heart, and during a feast could sing odes of Anacreon till he had grown hoarse or drunk. Through his master and other rhetors he had rubbed against philosophy, and become sufficiently acquainted with it to know the plans of various edifices of thought reared in Hellas and the colonies; he understood too that all these edifices were in ruins. He knew many Stoics personally; for these he cherished dislike, since he looked on them rather as a political party, and, besides, as hypochondriacs, hostile to joyous living. Sceptics had a seat frequently at his table; and during intervals between courses they overturned entire systems, and announced at their cups, filled with wine, that pleasure was vanity, truth something unattainable, and that the object of a sage could be only dead rest.

All this struck Cinna’s ears without piercing to the depth. He recognized no principle, and would have none. In Cato he saw the union of great character and great folly. He looked on life as a sea, on which winds blew whithersoever they listed; and wisdom in his eyes was the art of setting sails in such fashion that they would urge one’s boat forward. He esteemed his own broad shoulders and sound stomach; he esteemed his own beautiful Roman head, with his aquiline nose and powerful jaws. He was certain that with these he could pass through life somehow.

Though not belonging to the school of Sceptics, he was a practical Sceptic and hence a lover of pleasure, though he knew that pleasure was not happiness. The genuine teaching of Epicurus he did not know; hence he considered himself an Epicurean. In general he looked on philosophy as mental fencing, as useful as that which was taught by the sword-master. When discourses on it wearied him, he went to the circus to see blood.

He did not believe in the gods any more than in virtue, truth, and happiness. He believed only in soothsaying, and had his own superstitions; moreover, the mysterious beliefs of the Orient roused his curiosity. To slaves he was a good master, unless when occasional tedium brought him to cruelty. He thought life a great amphora, which was the more valuable the better the wine contained in it; hence he tried to fill his own with the best. He did not love any one, but he loved many things, among others his own eagle-like face with splendid skull, and his shapely patrician foot.

In the first years of his frolicking life he loved also to astound Rome, and succeeded a number of times. Later he grew as indifferent to that as to other things.