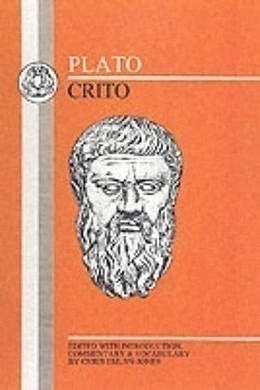 Crito is a short but important dialogue by the ancient Greek philosopher Plato. It is a conversation between Socrates and his wealthy friend Crito regarding justice (δικη), injustice (αδικια), and the appropriate response to injustice. Socrates thinks that injustice may not be answered with injustice, and refuses Crito’s offer to finance his escape from prison. This dialogue contains an ancient statement of the social contract theory of government.

SCENE: The Prison of Socrates.

SOCRATES: Why have you come at this hour, Crito? it must be quite early.

SOCRATES: What is the exact time?

CRITO: The dawn is breaking.

SOCRATES: I wonder that the keeper of the prison would let you in.

CRITO: He knows me because I often come, Socrates; moreover. I have done him a kindness.

SOCRATES: And are you only just arrived?

CRITO: No, I came some time ago.

SOCRATES: Then why did you sit and say nothing, instead of at once awakening me?

CRITO: I should not have liked myself, Socrates, to be in such great trouble and unrest as you are–indeed I should not: I have been watching with amazement your peaceful slumbers; and for that reason I did not awake you, because I wished to minimize the pain. I have always thought you to be of a happy disposition; but never did I see anything like the easy, tranquil manner in which you bear this calamity.

SOCRATES: Why, Crito, when a man has reached my age he ought not to be repining at the approach of death.

CRITO: And yet other old men find themselves in similar misfortunes, and age does not prevent them from repining.

SOCRATES: That is true. But you have not told me why you come at this early hour.

CRITO: I come to bring you a message which is sad and painful; not, as I believe, to yourself, but to all of us who are your friends, and saddest of all to me.

SOCRATES: What? Has the ship come from Delos, on the arrival of which I am to die?

CRITO: No, the ship has not actually arrived, but she will probably be here to-day, as persons who have come from Sunium tell me that they have left her there; and therefore to-morrow, Socrates, will be the last day of your life.

SOCRATES: Very well, Crito; if such is the will of God, I am willing; but my belief is that there will be a delay of a day.

CRITO: Why do you think so?

SOCRATES: I will tell you. I am to die on the day after the arrival of the ship?

CRITO: Yes; that is what the authorities say.

SOCRATES: But I do not think that the ship will be here until to-morrow; this I infer from a vision which I had last night, or rather only just now, when you fortunately allowed me to sleep.

CRITO: And what was the nature of the vision?

SOCRATES: There appeared to me the likeness of a woman, fair and comely, clothed in bright raiment, who called to me and said: O Socrates,

CRITO: What a singular dream, Socrates!

SOCRATES: There can be no doubt about the meaning, Crito, I think.

CRITO: Yes; the meaning is only too clear. But, oh! my beloved Socrates, let me entreat you once more to take my advice and escape. For if you die I shall not only lose a friend who can never be replaced, but there is another evil: people who do not know you and me will believe that I might have saved you if I had been willing to give money, but that I did not care. Now, can there be a worse disgrace than this–that I should be thought to value money more than the life of a friend? For the many will not be persuaded that I wanted you to escape, and that you refused.

SOCRATES: But why, my dear Crito, should we care about the opinion of the many? Good men, and they are the only persons who are worth considering, will think of these things truly as they occurred.

CRITO: But you see, Socrates, that the opinion of the many must be regarded, for what is now happening shows that they can do the greatest evil to any one who has lost their good opinion.

SOCRATES: I only wish it were so, Crito; and that the many could do the greatest evil; for then they would also be able to do the greatest good– and what a fine thing this would be! But in reality they can do neither; for they cannot make a man either wise or foolish; and whatever they do is the result of chance.

CRITO: Well, I will not dispute with you; but please to tell me, Socrates, whether you are not acting out of regard to me and your other friends: are you not afraid that if you escape from prison we may get into trouble with the informers for having stolen you away, and lose either the whole or a great part of our property; or that even a worse evil may happen to us? Now, if you fear on our account, be at ease; for in order to save you, we ought surely to run this, or even a greater risk; be persuaded, then, and do as I say.

SOCRATES: Yes, Crito, that is one fear which you mention, but by no means the only one.