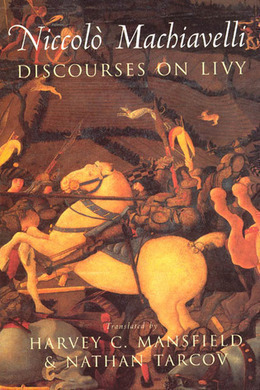 The First Decade of Titus Livius

The Discourses on the First Decade of Titus Livius is one of the masterpieces by Machiavelli. This work narrates the writer’s comments as to how a democratic government should be established. Through the comparison of Venice and Rome a detailed analysis of different kinds of governments is given. Machiavelli has ingeniously presented different aspects of his own contentions. Thought-provoking!

Albeit the jealous temper of mankind, ever more disposed to censure than to praise the work of others, has constantly made the pursuit of new methods and systems no less perilous than the search after unknown lands and seas; nevertheless, prompted by that desire which nature has implanted in me, fearlessly to undertake whatsoever I think offers a common benefit to all, I enter on a path which, being hitherto untrodden by any, though it involve me in trouble and fatigue, may yet win me thanks from those who judge my efforts in a friendly spirit. And although my feeble discernment, my slender experience of current affairs, and imperfect knowledge of ancient events, render these efforts of mine defective and of no great utility, they may at least open the way to some other, who, with better parts and sounder reasoning and judgment, shall carry out my design; whereby, if I gain no credit, at all events I ought to incur no blame.

When I see antiquity held in such reverence, that to omit other instances, the mere fragment of some ancient statue is often bought at a great price, in order that the purchaser may keep it by him to adorn his house, or to have it copied by those who take delight in this art; and how these, again, strive with all their skill to imitate it in their various works; and when, on the other hand, I find those noble labours which history shows to have been wrought on behalf of the monarchies and republics of old times, by kings, captains, citizens, lawgivers, and others who have toiled for the good of their country, rather admired than followed, nay, so absolutely renounced by every one that not a trace of that antique worth is now left among us, I cannot but at once marvel and grieve; at this inconsistency; and all the more because I perceive that, in civil disputes between citizens, and in the bodily disorders into which men fall, recourse is always had to the decisions and remedies, pronounced or prescribed by the ancients.

For the civil law is no more than the opinions delivered by the ancient jurisconsults, which, being reduced to a system, teach the jurisconsults of our own times how to determine; while the healing art is simply the recorded experience of the old physicians, on which our modern physicians found their practice. And yet, in giving laws to a commonwealth, in maintaining States and governing kingdoms, in organizing armies and conducting wars, in dealing with subject nations, and in extending a State’s dominions, we find no prince, no republic, no captain, and no citizen who resorts to the example of the ancients.

This I persuade myself is due, not so much to the feebleness to which the present methods of education have brought the world, or to the injury which a pervading apathy has wrought in many provinces and cities of Christendom, as to the want of a right intelligence of History, which renders men incapable in reading it to extract its true meaning or to relish its flavour. Whence it happens that by far the greater number of those who read History, take pleasure in following the variety of incidents which it presents, without a thought to imitate them; judging such imitation to be not only difficult but impossible; as though the heavens, the sun, the elements, and man himself were no longer the same as they formerly were as regards motion, order, and power.

Desiring to rescue men from this error, I have thought fit to note down with respect to all those books of Titus Livius which have escaped the malignity of Time, whatever seems to me essential to a right understanding of ancient and modern affairs; so that any who shall read these remarks of mine, may reap from them that profit for the sake of which a knowledge of History is to be sought. And although the task be arduous, still, with the help of those at whose instance I assumed the burthen, I hope to carry it forward so far, that another shall have no long way to go to bring it to its destination.