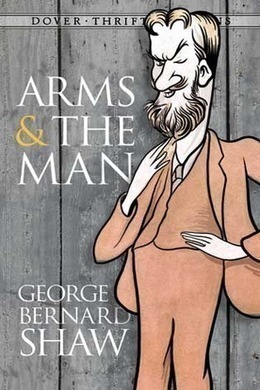 Arms and the Man

Arms and the Man was George Bernard Shaw’s first commercially successful play. It is a comedy about idealized love versus true love. A young Serbian woman idealizes her war-hero fiance and thinks the Swiss soldier who begs her to hide him a terrible coward. After the war she reverses her opinions, though the tangle of relationships must be resolved before her ex-soldier can conclude the last of everyone’s problems with Swiss exactitude. The play premiered to an enthusiastic reception. Only one man booed Shaw at the end, to which Shaw replied: ‘My dear fellow, I quite agree with you, but what are we two against so many?’

CATHERINE (entering hastily, full of good news). Raina–(she pronounces it Rah-eena, with the stress on the ee) Raina–(she goes to the bed, expecting to find Raina there.) Why, where–(Raina looks into the room.) Heavens! child, are you out in the night air instead of in your bed? You’ll catch your death. Louka told me you were asleep.

RAINA (coming in). I sent her away. I wanted to be alone. The stars are so beautiful! What is the matter?

CATHERINE. Such news. There has been a battle!

RAINA (her eyes dilating). Ah! (She throws the cloak on the ottoman, and comes eagerly to Catherine in her nightgown, a pretty garment, but evidently the only one she has on.)

CATHERINE. A great battle at Slivnitza! A victory! And it was won by Sergius.

RAINA (with a cry of delight). Ah! (Rapturously.) Oh, mother! (Then, with sudden anxiety) Is father safe?

CATHERINE. Of course: he sent me the news. Sergius is the hero of the hour, the idol of the regiment.

RAINA. Tell me, tell me. How was it! (Ecstatically) Oh, mother, mother, mother! (Raina pulls her mother down on the ottoman; and they kiss one another frantically.)

CATHERINE (with surging enthusiasm). You can’t guess how splendid it is. A cavalry charge–think of that! He defied our Russian commanders–acted without orders–led a charge on his own responsibility–headed it himself–was the first man to sweep through their guns. Can’t you see it, Raina; our gallant splendid Bulgarians with their swords and eyes flashing, thundering down like an avalanche and scattering the wretched Servian dandies like chaff. And you–you kept Sergius waiting a year before you would be betrothed to him. Oh, if you have a drop of Bulgarian blood in your veins, you will worship him when he comes back.

RAINA. What will he care for my poor little worship after the acclamations of a whole army of heroes? But no matter: I am so happy–so proud! (She rises and walks about excitedly.) It proves that all our ideas were real after all.

CATHERINE (indignantly). Our ideas real! What do you mean?