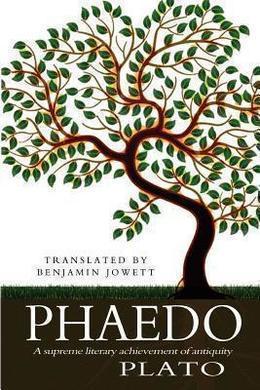 The Phaedo is acknowledged to be one of Plato’s masterpieces, showing him both as a philosopher and as a dramatist at the height of his powers. For its moving account of the execution of Socrates, the Phaedo ranks among the supreme literary achievements of antiquity. It is also a document crucial to the understanding of many ideas deeply ingrained in western culture, and provides one of the best introductions to Plato’s thought.

Phaedo, who is the narrator of the dialogue to Echecrates of Phlius. Socrates, Apollodorus, Simmias, Cebes, Crito and an Attendant of the Prison.

SCENE: The Prison of Socrates.

PLACE OF THE NARRATION: Phlius.

ECHECRATES: Were you yourself, Phaedo, in the prison with Socrates on the day when he drank the poison?

PHAEDO: Yes, Echecrates, I was.

ECHECRATES: I should so like to hear about his death. What did he say in his last hours? We were informed that he died by taking poison, but no one knew anything more; for no Phliasian ever goes to Athens now, and it is a long time since any stranger from Athens has found his way hither; so that we had no clear account.

PHAEDO: Did you not hear of the proceedings at the trial?

ECHECRATES: Yes; some one told us about the trial, and we could not understand why, having been condemned, he should have been put to death, not at the time, but long afterwards. What was the reason of this?

PHAEDO: An accident, Echecrates: the stern of the ship which the Athenians send to Delos happened to have been crowned on the day before he was tried.

ECHECRATES: What is this ship?

PHAEDO: It is the ship in which, according to Athenian tradition, Theseus went to Crete when he took with him the fourteen youths, and was the saviour of them and of himself. And they were said to have vowed to Apollo at the time, that if they were saved they would send a yearly mission to Delos. Now this custom still continues, and the whole period of the voyage to and from Delos, beginning when the priest of Apollo crowns the stern of the ship, is a holy season, during which the city is not allowed to be polluted by public executions; and when the vessel is detained by contrary winds, the time spent in going and returning is very considerable. As I was saying, the ship was crowned on the day before the trial, and this was the reason why Socrates lay in prison and was not put to death until long after he was condemned.

ECHECRATES: What was the manner of his death, Phaedo? What was said or done? And which of his friends were with him? Or did the authorities forbid them to be present–so that he had no friends near him when he died?

PHAEDO: No; there were several of them with him.

ECHECRATES: If you have nothing to do, I wish that you would tell me what passed, as exactly as you can.

PHAEDO: I have nothing at all to do, and will try to gratify your wish. To be reminded of Socrates is always the greatest delight to me, whether I speak myself or hear another speak of him.

ECHECRATES: You will have listeners who are of the same mind with you, and I hope that you will be as exact as you can.

PHAEDO: I had a singular feeling at being in his company. For I could hardly believe that I was present at the death of a friend, and therefore I did not pity him, Echecrates; he died so fearlessly, and his words and bearing were so noble and gracious, that to me he appeared blessed. I thought that in going to the other world he could not be without a divine call, and that he would be happy, if any man ever was, when he arrived there, and therefore I did not pity him as might have seemed natural at such an hour. But I had not the pleasure which I usually feel in philosophical discourse (for philosophy was the theme of which we spoke). I was pleased, but in the pleasure there was also a strange admixture of pain; for I reflected that he was soon to die, and this double feeling was shared by us all; we were laughing and weeping by turns, especially the excitable Apollodorus–you know the sort of man?

PHAEDO: He was quite beside himself; and I and all of us were greatly moved.

PHAEDO: Of native Athenians there were, besides Apollodorus, Critobulus and his father Crito, Hermogenes, Epigenes, Aeschines, Antisthenes; likewise Ctesippus of the deme of Paeania, Menexenus, and some others; Plato, if I am not mistaken, was ill.

ECHECRATES: Were there any strangers?

PHAEDO: No, they were said to be in Aegina.

PHAEDO: I think that these were nearly all.

ECHECRATES: Well, and what did you talk about?