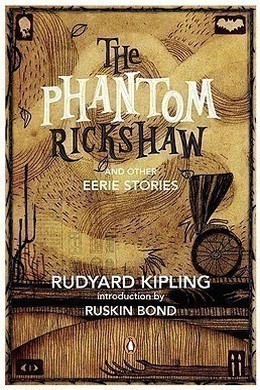 And Other Ghost Stories

The Phantom Rickshaw & Other Eerie Tales brings together four of Kipling’s most-loved short stories. Each deals with events that can’t quite be explained away, whether a traditional ghost story, a terrifyingly realistic nightmare or an sumptuous and lavish romance. Powerful, exotic and extravagant, these tales are rated, by some, to be the best stories Kipling ever wrote, with The Man Who Would Be King being hailed as the finest story in the English language.

One of the few advantages that India has over England is a great Knowability. After five years’ service a man is directly or indirectly acquainted with the two or three hundred Civilians in his Province, all the Messes of ten or twelve Regiments and Batteries, and some fifteen hundred other people of the non-official caste. In ten years his knowledge should be doubled, and at the end of twenty he knows, or knows something about, every Englishman in the Empire, and may travel anywhere and everywhere without paying hotel-bills.

Globe-trotters who expect entertainment as a right, have, even within my memory, blunted this open-heartedness, but none the less to-day, if you belong to the Inner Circle and are neither a Bear nor a Black Sheep, all houses are open to you, and our small world is very, very kind and helpful.

Rickett of Kamartha stayed with Polder of Kumaon some fifteen years ago. He meant to stay two nights, but was knocked down by rheumatic fever, and for six weeks disorganized Polder’s establishment, stopped Polder’s work, and nearly died in Polder’s bedroom. Polder behaves as though he had been placed under eternal obligation by Rickett, and yearly sends the little Ricketts a box of presents and toys. It is the same everywhere. The men who do not take the trouble to conceal from you their opinion that you are an incompetent ass, and the women who blacken your character and misunderstand your wife’s amusements, will work themselves to the bone in your behalf if you fall sick or into serious trouble.

Heatherlegh, the Doctor, kept, in addition to his regular practice, a hospital on his private account–an arrangement of loose boxes for Incurables, his friend called it–but it was really a sort of fitting-up shed for craft that had been damaged by stress of weather. The weather in India is often sultry, and since the tale of bricks is always a fixed quantity, and the only liberty allowed is permission to work overtime and get no thanks, men occasionally break down and become as mixed as the metaphors in this sentence.

Heatherlegh is the dearest doctor that ever was, and his invariable prescription to all his patients is, “lie low, go slow, and keep cool.” He says that more men are killed by overwork than the importance of this world justifies. He maintains that overwork slew Pansay, who died under his hands about three years ago. He has, of course, the right to speak authoritatively, and he laughs at my theory that there was a crack in Pansay’s head and a little bit of the Dark World came through and pressed him to death. “Pansay went off the handle,” says Heatherlegh, “after the stimulus of long leave at Home. He may or he may not have behaved like a blackguard to Mrs. Keith-Wessington. My notion is that the work of the Katabundi Settlement ran him off his legs, and that he took to brooding and making much of an ordinary P. & O. flirtation. He certainly was engaged to Miss Mannering, and she certainly broke off the engagement. Then he took a feverish chill and all that nonsense about ghosts developed. Overwork started his illness, kept it alight, and killed him poor devil. Write him off to the System–one man to take the work of two and a half men.”

I do not believe this. I used to sit up with Pansay sometimes when Heatherlegh was called out to patients, and I happened to be within claim. The man would make me most unhappy by describing in a low, even voice, the procession that was always passing at the bottom of his bed. He had a sick man’s command of language. When he recovered I suggested that he should write out the whole affair from beginning to end, knowing that ink might assist him to ease his mind. When little boys have learned a new bad word they are never happy till they have chalked it up on a door. And this also is Literature.

He was in a high fever while he was writing, and the blood-and-thunder Magazine diction he adopted did not calm him. Two months afterward he was reported fit for duty, but, in spite of the fact that he was urgently needed to help an undermanned Commission stagger through a deficit, he preferred to die; vowing at the last that he was hag-ridden. I got his manuscript before he died, and this is his version of the affair, dated 1885:

My doctor tells me that I need rest and change of air. It is not improbable that I shall get both ere long–rest that neither the red-coated messenger nor the midday gun can break, and change of air far beyond that which any homeward-bound steamer can give me. In the meantime I am resolved to stay where I am; and, in flat defiance of my doctor’s orders, to take all the world into my confidence. You shall learn for yourselves the precise nature of my malady; and shall, too, judge for yourselves whether any man born of woman on this weary earth was ever so tormented as I.