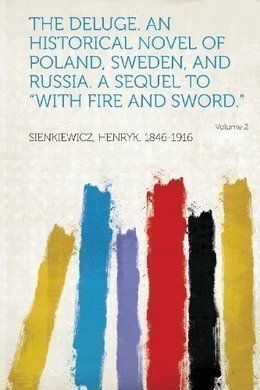 An Historical Novel of Poland, Sweden, and Russia

This is volume two of a two-volume work, the sequel to With Fire and Sword, a massive book called one of the greatest in European literature. Number two in his trilogy on the history of Poland, it tells the love story of a man and a woman tragically separated by foolishness, pride, confusion and the Swedish invation of Poland in the 1500s which divided a nation against itself and drew the best and worst out of its citizens.

The war with cannon was no bar to negotiations, which the fathers determined to use at every opportunity. They wished to delude the enemy and procrastinate till aid came, or at least severe winter. But Miller did not cease to believe that the monks wished merely to extort the best terms.

In the evening, therefore, after that cannonading, he sent Colonel Kuklinovski again with a summons to surrender. The prior showed Kuklinovski the safeguard of the king, which closed his mouth at once. But Miller had a later command of the king to occupy Boleslav, Vyelunie, Kjepits, and Chenstohova.

“Take this order to them,” said he to Kuklinovski; “for I think that they will lack means of evasion when it is shown them.” But he was deceived.

The prior answered: “If the command includes Chenstohova, let the general occupy the place with good fortune. He may be sure that the cloister will make no opposition; but Chenstohova is not Yasna Gora, of which no mention is made in the order.”

When Miller heard this answer he saw that he had to deal with diplomats more adroit than himself; reasons were just what he lacked,–and there remained only cannon.

A truce lasted through the night. The Swedes worked with vigor at making better trenches; and on Yasna Gora they looked for the damages of the previous day, and saw with astonishment that there were none. Here and there roofs and rafters were broken, here and there plaster had dropped from the walls,–that was all. Of the men, none had fallen, no one was even maimed. The prior, going around on the walls, said with a smile to the soldiers,–

“But see, this enemy with his bombarding is not so terrible as reported. After a festival there is often more harm done. God’s care is guarding you; God’s hand protects you; only let us endure, and we shall see greater wonders.”

Sunday came, the festival of the offering of the Holy Lady. There was no hindrance to services, since Miller was waiting for the final answer, which the monks had promised to send after midday.

Mindful meanwhile of the words of Scripture, how Israel bore the ark of God around the camp to terrify the Philistines, they went again in procession with the monstrance.

The letter was sent about one o’clock, not to surrender; but to repeat the answer given Kuklinovski, that the church and the cloister are called Yasna Gora, and that the town Chenstohova does not belong to the cloister at all. “Therefore we implore earnestly his worthiness,” wrote the prior Kordetski, “to be pleased to leave in peace our Congregation and the church consecrated to God and His Most Holy Mother, so that God may be honored therein during future times. In this church also we shall implore the Majesty of God for the health and success of the Most Serene King of Sweden. Meanwhile we, unworthy men, while preferring our request, commend ourselves most earnestly to the kindly consideration of your worthiness, confiding in your goodness, from which we promise much to ourselves in the future.”

There were present at the reading of the letter, Sadovski; Count Veyhard; Horn, governor of Kjepitsi; De Fossis, a famous engineer; and the Prince of Hesse, a man young and very haughty, who though subordinate to Miller, was willing to show his own importance. He laughed therefore maliciously, and repeated the conclusion of the letter with emphasis,–

“They promise much to themselves from your kindness; General, that is a hint for a contribution. I put one question, gentlemen: Are the monks better beggars or better gunners?”

“True,” said Horn, “during these first days we have lost so many men that a good battle would not have taken more.”

“As for me,” continued the Prince of Hesse, “I do not want money; I am not seeking for glory, and I shall freeze off my feet in these huts. What a pity that we did not go to Prussia, a rich country, pleasant, one town excelling another.”

Miller, who acted quickly but thought slowly, now first understood the sense of the letter; he grew purple and said,–

“The monks are jeering at us, gracious gentlemen.”

“They had not the intention of doing so, but it comes out all the same,” answered Horn.

“To the trenches, then! Yesterday the fire was weak, the balls few.”

The orders given flew swiftly from end to end of the Swedish line. The trenches were covered with blue clouds; the cloister answered quickly with all its energy. But this time the Swedish guns were better planted, and began to cause greater damage. Bombs, loaded with powder, were scattered, each drawing behind it a curl of flame. Lighted torches were hurled too, and rolls of hemp steeped in rosin.