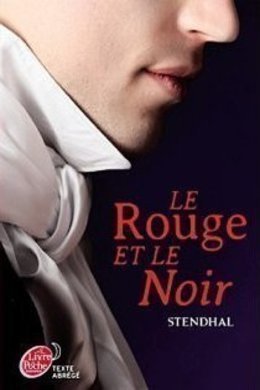 The Red and the Black

A Chronicle of the 19th Century

A landmark in the development of psychological realism, Stendhal’s masterpiece chronicles a young man’s struggles with the dualities of his nature. Julien Sorel, a young dreamer from the provinces whose imagination is afire with Napoleonic ideals, sets off to make his fortune in Parisian society of Restoration France. His encounters and experiences along the way incite constant inner conflict, drawing him back and forth between sincerity and hypocrisy, idealism and cynicism, humility and pride, love and ambition.

The little town of Verrières can pass for one of the prettiest in Franche-Comté. Its white houses with their pointed red-tiled roofs stretch along the slope of a hill, whose slightest undulations are marked by groups of vigorous chestnuts. The Doubs flows to within some hundred feet above its fortifications, which were built long ago by the Spaniards, and are now in ruins.

Verrières is sheltered on the north by a high mountain which is one of the branches of the Jura. The jagged peaks of the Verra are covered with snow from the beginning of the October frosts. A torrent which rushes down from the mountains traverses Verrières before throwing itself into the Doubs, and supplies the motive power for a great number of saw mills. The industry is very simple, and secures a certain prosperity to the majority of the inhabitants who are more peasant than bourgeois. It is not, however, the wood saws which have enriched this little town. It is the manufacture of painted tiles, called Mulhouse tiles, that is responsible for that general affluence which has caused the façades of nearly all the houses in Verrières to be rebuilt since the fall of Napoleon.

One has scarcely entered the town, before one is stunned by the din of a strident machine of terrifying aspect. Twenty heavy hammers which fall with a noise that makes the paved floor tremble, are lifted up by a wheel set in motion by the torrent. Each of these hammers manufactures every day I don’t know how many thousands of nails. The little pieces of iron which are rapidly transformed into nails by these enormous hammers, are put in position by fresh pretty young girls. This labour so rough at first sight is one of the industries which most surprises the traveller who penetrates for the first time the mountains which separate France and Helvetia. If when he enters Verrières, the traveller asks who owns this fine nail factory which deafens everybody who goes up the Grande-Rue, he is answered in a drawling tone “Eh! it belongs to M. the Mayor.”

And if the traveller stops a few minutes in that Grande-Rue of Verrières which goes on an upward incline from the bank of the Doubs to nearly as far as the summit of the hill, it is a hundred to one that he will see a big man with a busy and important air.

When he comes in sight all hats are quickly taken off. His hair is grizzled and he is dressed in grey. He is a Knight of several Orders, has a large forehead and an aquiline nose, and if you take him all round, his features are not devoid of certain regularity. One might even think on the first inspection that it combines with the dignity of the village mayor that particular kind of comfortableness which is appropriate to the age of forty-eight or fifty. But soon the traveller from Paris will be shocked by a certain air of self-satisfaction and self-complacency mingled with an almost indefinable narrowness and lack of inspiration. One realises at last that this man’s talent is limited to seeing that he is paid exactly what he is owed, and in paying his own debts at the latest possible moment.

Such is M. de Rênal, the mayor of Verrières. After having crossed the road with a solemn step, he enters the mayoral residence and disappears from the eye of the traveller. But if the latter continues to walk a hundred steps further up, he will perceive a house with a fairly fine appearance, with some magnificent gardens behind an iron grill belonging to the house. Beyond that is an horizon line formed by the hills of Burgundy, which seem ideally made to delight the eyes. This view causes the traveller to forget that pestilential atmosphere of petty money-grubbing by which he is beginning to be suffocated.

He is told that this house belongs to M. de Rênal. It is to the profits which he has made out of his big nail factory that the mayor of Verrières owes this fine residence of hewn stone which he is just finishing. His family is said to be Spanish and ancient, and is alleged to have been established in the country well before the conquest of Louis XIV.