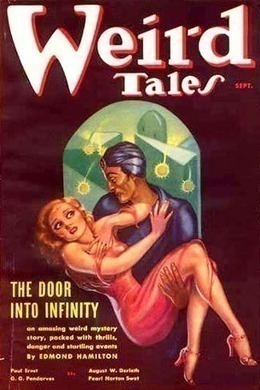 The Door into Infinity

An amazing weird mystery story, packed with thrills, danger and startling events. Edmond Hamilton. For most people, this name conjures visions of two-fisted space opera – pure pulp science fiction. And Hamilton – known as the author of the Captain Future series – was indeed one of the foremost writers of pulp space opera. Over the years, as his work became more polished and sophisticated, he evolved into far more than that: a visionary of the future whose imagination knew no bounds. He was truly a cosmic writer.

“Where leads the Door?”

“It leads outside our world.”

“Who taught our forefathers to open the Door?”

“They Beyond the Door taught them.”

“To whom do we bring these sacrifices?”

“We bring them to Those Beyond the Door.”

“Shall the Door be opened that They may take them?”

“Let the Door be opened!”

Paul Ennis had listened thus far, his haggard face uncomprehending in expression, but now he interrupted the speaker.

“But what does it all mean, inspector? Why are you repeating this to me?”

“Did you ever hear anyone speak words like that?” asked Inspector Pierce Campbell, leaning tautly forward for the answer.

“Of course not–it just sounds like gibberish to me,” Ennis exclaimed. “What connection can it have with my wife?”

He had risen to his feet, a tall, blond young American whose good-looking face was drawn and worn by inward agony, whose crisp yellow hair was brushed back from his forehead in disorder, and whose blue eyes were haunted with an anguished dread.

He kicked back his chair and strode across the gloomy little office, whose single window looked out on the thickening, foggy twilight of London. He bent across the dingy desk, gripping its edges with his hands as he spoke tensely to the man sitting behind it.

“Why are we wasting time talking here?” Ennis cried. “Sitting here talking, when anything may be happening to Ruth!

“It’s been hours since she was kidnapped. They may have taken her anywhere, even outside of London by now. And instead of searching for her, you sit here and talk gibberish about Doors!”

Inspector Campbell seemed unmoved by Ennis’ passion. A bulky, almost bald man, he looked up with his colorless, sagging face, in which his eyes gleamed like two crumbs of bright brown glass.

“You’re not helping me much by giving way to your emotions, Mr. Ennis,” he said in his flat voice.

“Give way? Who wouldn’t give way?” cried Ennis. “Don’t you understand, man, it’s Ruth that’s gone–my wife! Why, we were married only last week in New York. And on our second day here in London, I see her whisked into a limousine and carried away before my eyes! I thought you men at Scotland Yard here would surely act, do something. Instead you talk crazy gibberish to me!”

“Those words are not gibberish,” said Pierce Campbell quietly. “And I think they’re related to the abduction of your wife.”

“What do you mean? How could they be related?”

The inspector’s bright little brown eyes held Ennis’. “Did you ever hear of an organization called the Brotherhood of the Door?”

Ennis shook his head, and Campbell continued, “Well, I am certain your wife was kidnapped by members of the Brotherhood.”

“What kind of an organization is it?” the young American demanded. “A band of criminals?”

“No, it is no ordinary criminal organization,” the detective said. His sagging face set strangely. “Unless I am mistaken, the Brotherhood of the Door is the most unholy and blackly evil organization that has ever existed on this earth. Almost nothing is known of it outside its circle. I myself in twenty years have learned little except its existence and name. That ritual I just repeated to you, I heard from the lips of a dying member of the Brotherhood, who repeated the words in his delirium.”

“But what becomes of the people they kidnap?” cried the pale young American. “What do they do with them?”