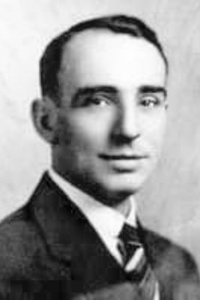 Edmond Moore Hamilton was an American author of science fiction stories and novels during the mid-twentieth century. Edmond is often credited as the first author of the first hardcover compilation of what would eventually come to be known as the Science Fiction genre. His career as a science fiction writer began with the publication of the short story “The Monster God of Mamurth” and quickly became a central member of the remarkable group of Weird Tales writers assembled by editor Farnsworth Wright, that included H. P. Lovecraft and Robert E. Howard. Hamilton would publish 79 works of fiction in Weird Tales making him one of the most prolific of the magazine’s contributors.

Edmond Hamilton’s classic Sci-Fi thriller, The Legion of Lazarus. Being expelled from an air lock into deep space was the legal method of execution. But...read more »

Paris, 1944. Two scientist, using their own invention, break the laws of time to conjure up an apothcary from 15th century Paris to the here and now. Sh...read more »

Helpless, doomed, into the graveyard of space floats the wrecked freighter Pallas. – ‘The airlock’s inner door then slid open and the newcomers stepped ...read more »

He was afraid – not of the present or the future, but of the past. He was afraid of the thing tagged Reed Kieran, that stiff blind voiceless thing wheel...read more »

Grim death was the only romance to be found on this world that boasted a thousand moons…a group of people looking for pirate treasure instead find alien...read more »