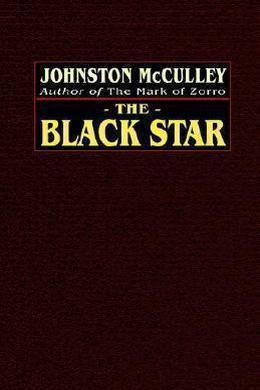 The Black Star was a master criminal who took great care to never be identifiable, always wore a mask so nobody knew what he looked like, rarely spoke to keep his voice from being recognized, and the only mark left at the scenes of the crimes which he and his gang committed were small black stars which were tacked as a sign of their presence, and an occasional sarcastic note to signify his presence and responsibility. Even those who worked for him knew nothing of him, all of which were making his crimes virtually unsolvable. The police were at a complete loss as to his identity and at a method of stopping his criminal activities. He seemed to have the perfect strategic setup and all advantages were in his favor. He even somehow knew where the wealthy kept their jewels and money, and knew when they would remove valuable items from their safes and deposit boxes. Thus Roger Verbeck decided to take on the case of the Black Star using his own methodology. The Black Star will keep you guessing from beginning to end, just as he kept the police and Verbeck guessing.

Winds whistled up the river, and winds whistled down from the hills, and they met to swirl and gather fury and rattle the city’s millions of windowpanes. They carried a mixture of sleet and fine snow, the first herald of the winter to come. In the business district they swung signs madly back and forth, and roared around the corners of high office buildings, and swept madly against struggling trolley cars. They poured through the man-made cañons; they dashed out the broad boulevards—and so they came to the attention of Mr. Roger Verbeck, at about the hour of midnight, as he turned over in his warm bed and debated whether to rise and lower the window or take a chance with the rapidly lowering temperature.

“Beastly night!” Verbeck confided to himself, and put his head beneath the covers.

He slept—and suddenly he awakened. A moment before he had been in the midst of a pleasant dream; now every sense was alert, and his right hand, creeping softly under the cover, reached the side of the bed and grasped an automatic pistol that hung in a rack there.

From the adjoining room—his library—there came no flash of an electric torch, no footfall, no sound foreign to the apartment, nothing to indicate the presence of an intruder. Yet Verbeck sensed that an intruder was there.

He slipped quietly from the bed, shivering a bit because of the cold wind, put his feet into slippers, and drew on a dressing gown over his pajamas. Then, his pistol held ready for use in case of emergency, he started across the bedroom, taking short steps and walking on his toes.

A reflection entered the room from the arc light on the nearest street corner. This uncertain light was shut off for an instant, and Verbeck whirled quickly, silently, to find another man slipping up beside him. It was Muggs—a little, wiry man of uncertain age, who had been in Verbeck’s employ for several years, valet at times, comrade in arms at times, willing adventurer always. Muggs bent forward until his lips were close to Verbeck’s ear.

Verbeck nodded; they crept nearer the door. Inch by inch, Verbeck pulled aside one of the curtains, until they could peer into the other room. A gleam from the corner arc light penetrated the library, too. It revealed the interior of the room in a sort of semi-gloom, causing elusive shadows that flitted here and there in such fashion that they scarcely could be distinguished from substance. Also, it revealed an open window near the fire escape—and it showed the form of a man standing before Verbeck’s antique desk in a corner.

Muggs bent beneath his master’s arm to see better. He felt Verbeck grip his shoulder, and looked up to find him indicating the open window. Like a shadow, Muggs, who also held a weapon in his hand, slipped through the curtains, crept along the wall, and advanced toward that window to cut off the intruder’s retreat.

An instant Verbeck waited; then he stepped into the room, found the electric switch, and snapped on the lights, and leveled his automatic.

The man before the desk whirled with a snarl that showed two rows of jagged, uneven, yellow teeth. He took in the situation at a glance, saw Muggs at the window, and Verbeck at the door, and knew he had been caught in a trap. His eyes narrowed and flashed; he bent forward, giving the appearance of a rat at bay, and his hand dropped slowly toward his hip.

“Better not!” There was a certain quality in Verbeck’s voice that told the burglar the man before him was neither nervous nor afraid, and would shoot if necessary. The thief’s hands went above his head in token of surrender, and the belligerent light that had been in his eyes faded.

“It appears,” said Verbeck, “that we have discovered you in a delicate position.”

“Rather unceremonious, this call,” Verbeck went on. “Why didn’t you send up your card from the office?”