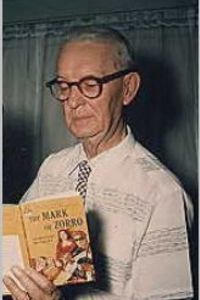 Johnston McCulley was the author of hundreds of stories, fifty novels, numerous screenplays for film and television, and the creator of the character Zorro. Many of his novels and stories were written under the pseudonyms Harrington Strong, Raley Brien, George Drayne, Monica Morton, Rowena Raley, Frederic Phelps, Walter Pierson, and John Mack Stone, among others. Aside from Zorro, McCulley created many other pulp characters, including Black Star, The Spider, The Mongoose, and Thubway Tham. Many of McCulley’s characters—The Green Ghost, The Thunderbolt, and The Crimson Clown—were inspirations for the masked heroes that have appeared in popular culture from McCulley’s time to the present day.

Probably McCulley’s second most popular character (after Zorro), The Black Star is a criminal mastermind, what was once termed a ‘gentleman criminal.’ H...read more »

The Black Star was a master criminal who took great care to never be identifiable, always wore a mask so nobody knew what he looked like, rarely spoke t...read more »

Old California, in a bygone era of sprawling haciendas and haughty caballeros, suffers beneath the whip-lash of oppression. Missions are pillaged, nativ...read more »

The supervillain’s right-hand man, John Warwick, must steal a priceless necklace. This is his last assignment, for if he can finally satisfy the Spider,...read more »