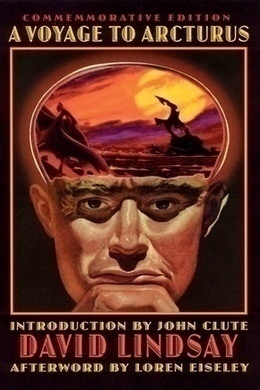 A Voyage to Arcturus

A Voyage to Arcturus is a novel by the Scottish writer David Lindsay. It combines fantasy, philosophy, and science fiction in an exploration of the nature of good and evil and their relationship with existence. It has been described by the critic and philosopher Colin Wilson as the ‘greatest novel of the twentieth century’ and was a central influence on C.S. Lewis’s Space Trilogy.

On a march evening, at eight o’clock, Backhouse, the medium–a fast-rising star in the psychic world–was ushered into the study at Prolands, the Hampstead residence of Montague Faull. The room was illuminated only by the light of a blazing fire. The host, eying him with indolent curiosity, got up, and the usual conventional greetings were exchanged. Having indicated an easy chair before the fire to his guest, the South American merchant sank back again into his own. The electric light was switched on. Faull’s prominent, clear-cut features, metallic-looking skin, and general air of bored impassiveness, did not seem greatly to impress the medium, who was accustomed to regard men from a special angle. Backhouse, on the contrary, was a novelty to the merchant. As he tranquilly studied him through half closed lids and the smoke of a cigar, he wondered how this little, thickset person with the pointed beard contrived to remain so fresh and sane in appearance, in view of the morbid nature of his occupation.

“Do you smoke?” drawled Faull, by way of starting the Conversation. “No? Then will you take a drink?”

“Not at present, I thank you.”

“Everything is satisfactory? The materialisation will take place?”

“I see no reason to doubt it.”

“That’s good, for I would not like my guests to be disappointed. I have your check written out in my pocket.”

“Afterward will do quite well.”

“Nine o’clock was the time specified, I believe?”

The conversation continued to flag. Faull sprawled in his chair, and remained apathetic.

“Would you care to hear what arrangements I have made?”

“I am unaware that any are necessary, beyond chairs for your guests.”

“I mean the decoration of the seance room, the music, and so forth.”

Backhouse stared at his host. “But this is not a theatrical performance.”

“That’s correct. Perhaps I ought to explain…. There will be ladies present, and ladies, you know, are aesthetically inclined.”

“In that case I have no objection. I only hope they will enjoy the performance to the end.”

He spoke rather dryly.

“Well, that’s all right, then,” said Faull. Flicking his cigar into the fire, he got up and helped himself to whisky.

“Will you come and see the room?”

“Thank you, no. I prefer to have nothing to do with it till the time arrives.”

“Then let’s go to see my sister, Mrs. Jameson, who is in the drawing room. She sometimes does me the kindness to act as my hostess, as I am unmarried.”

“I will be delighted,” said Backhouse coldly.

They found the lady alone, sitting by the open pianoforte in a pensive attitude. She had been playing Scriabin and was overcome. The medium took in her small, tight, patrician features and porcelain-like hands, and wondered how Faull came by such a sister. She received him bravely, with just a shade of quiet emotion. He was used to such receptions at the hands of the sex, and knew well how to respond to them.

“What amazes me,” she half whispered, after ten minutes of graceful, hollow conversation, “is, if you must know it, not so much the manifestation itself–though that will surely be wonderful–as your assurance that it will take place. Tell me the grounds of your confidence.”

“I dream with open eyes,” he answered, looking around at the door, “and others see my dreams. That is all.”

“But that’s beautiful,” responded Mrs. Jameson. She smiled rather absently, for the first guest had just entered.

It was Kent-Smith, the ex-magistrate, celebrated for his shrewd judicial humour, which, however, he had the good sense not to attempt to carry into private life. Although well on the wrong side of seventy, his eyes were still disconcertingly bright. With the selective skill of an old man, he immediately settled himself in the most comfortable of many comfortable chairs.

“So we are to see wonders tonight?”

“Ah, you should not have mentioned my unfortunate book. An old public servant is merely amusing himself in his retirement, Mr. Backhouse. You have no cause for alarm–I have studied in the school of discretion.”

“I am not alarmed. There can be no possible objection to your publishing whatever you please.”

“You are most kind,” said the old man, with a cunning smile.

“Trent is not coming tonight,” remarked Mrs. Jameson, throwing a curious little glance at her brother.

“I never thought he would. It’s not in his line.”

“Mrs. Trent, you must understand,” she went on, addressing the ex-magistrate, “has placed us all under a debt of gratitude. She has decorated the old lounge hall upstairs most beautifully, and has secured the services of the sweetest little orchestra.”

“But this is Roman magnificence.”

“Backhouse thinks the spirits should be treated with more deference,” laughed Faull.