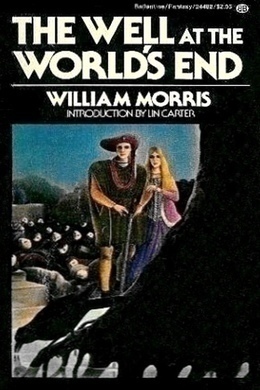 The Well at the World's End

Credited with inspiring such fantasy luminaries as C.S. Lewis and J.R.R. Tolkien, William Morris’ The Well at the World’s End follows the travels of a prince, Ralph of Upmeads, who undertakes a journey to find the magical well of the title. Along the way, our hero encounters adventure, travails, and romance. A must-read for fans of classic quest stories.

Long ago there was a little land, over which ruled a regulus or kinglet, who was called King Peter, though his kingdom was but little. He had four sons whose names were Blaise, Hugh, Gregory and Ralph: of these Ralph was the youngest, whereas he was but of twenty winters and one; and Blaise was the oldest and had seen thirty winters.

Now it came to this at last, that to these young men the kingdom of their father seemed strait; and they longed to see the ways of other men, and to strive for life. For though they were king’s sons, they had but little world’s wealth; save and except good meat and drink, and enough or too much thereof; house-room of the best; friends to be merry with, and maidens to kiss, and these also as good as might be; freedom withal to come and go as they would; the heavens above them, the earth to bear them up, and the meadows and acres, the woods and fair streams, and the little hills of Upmeads, for that was the name of their country and the kingdom of King Peter.

So having nought but this little they longed for much; and that the more because, king’s sons as they were, they had but scant dominion save over their horses and dogs: for the men of that country were stubborn and sturdy vavassors, and might not away with masterful doings, but were like to pay back a blow with a blow, and a foul word with a buffet. So that, all things considered, it was little wonder if King Peter’s sons found themselves straitened in their little land: wherein was no great merchant city; no mighty castle, or noble abbey of monks: nought but fair little halls of yeomen, with here and there a franklin’s court or a shield-knight’s manor-house; with many a goodly church, and whiles a house of good canons, who knew not the road to Rome, nor how to find the door of the Chancellor’s house.

So these young men wearied their father and mother a long while with telling them of their weariness, and their longing to be gone: till at last on a fair and hot afternoon of June King Peter rose up from the carpet which the Prior of St. John’s by the Bridge had given him (for he had been sleeping thereon amidst the grass of his orchard after his dinner) and he went into the hall of his house, which was called the High House of Upmeads, and sent for his four sons to come to him. And they came and stood before his high-seat and he said:

“Sons, ye have long wearied me with words concerning your longing for travel on the roads; now if ye verily wish to be gone, tell me when would ye take your departure if ye had your choice?”

They looked at one another, and the three younger ones nodded at Blaise the eldest: so he began, and said: “Saving the love and honour that we have for thee, and also for our mother, we would be gone at once, even with the noon’s meat still in our bellies. But thou art the lord in this land, and thou must rule. Have I said well, brethren?” And they all said “Yea, yea.” Then said the king; “Good! now is the sun high and hot; yet if ye ride softly ye may come to some good harbour before nightfall without foundering your horses. So come ye in an hour’s space to the Four-want-way, and there and then will I order your departure.”

The young men were full of joy when they heard his word; and they departed and went this way and that, gathering such small matters as each deemed that he needed, and which he might lightly carry with him; then they armed themselves, and would bid the squires bring them their horses; but men told them that the said squires had gone their ways already to the Want-way by the king’s commandment: so thither they went at once a-foot all four in company, laughing and talking together merrily.