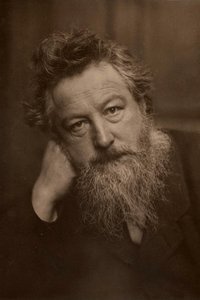 William Morris was an English textile designer, poet, novelist, translator, and revolutionary socialist. As a designer, he was associated with the English Arts and Crafts Movement and was a major contributor to the revival of traditional textile arts and methods of production in Britain. His literary contributions helped to establish the modern fantasy genre. He achieved success with the publication of his epic poems and novels, namely The Earthly Paradise, A Dream of John Ball, the utopian News from Nowhere, and the fantasy romance The Well at the World’s End.

One of the most literary and readable of utopian novels, News from Nowhere chronicles the impressions of a nineteenth-century visitor to the twenty-seco...read more »

If you like your epic fantasy tales wrapped up in a dreamy layer of intricate, lyrical language, you’ll love William Morris’ engrossing novel The Hollow...read more »

The first step toward the characteristic large-scale fantasies which have had such influence on the genre …is The House of the Wolfings. Here the settin...read more »

When Morris published this epic tale of great love and heroic battles he intended it as a kind of sequel to The House of the Wolfings, but this novel ha...read more »

A life scarce worth the living, a poor fame Scarce worth the winning, in a wretched land, Where fear and pain go upon either hand, As toward the e...read more »

This is the Longman edition in which some passages were replaced with prose summaries by Winifred Turner and Helen Scott. Son of King Sigmund, young Sig...read more »

One of the great books of world literature–an unforgettable tale of jealousy, unrequited love, greed, and vengeance. Based on Viking Age poems and compo...read more »

In his final novel, Morris draws upon Icelandic lore to tell a tale of two lovers, Osberne and Elfhild, separated by a broad river. When Elfhild vanishe...read more »

Drawing on medieval legend and age-old fantasy tropes, William Morris’ Water of the Wondrous Isles combines the best of both of these genres and updates...read more »

Credited with inspiring such fantasy luminaries as C.S. Lewis and J.R.R. Tolkien, William Morris’ The Well at the World’s End follows the travels of a p...read more »

The Wood Beyond the World is a splendid tale, told in a romantic style and written in a pseudo-archaic English. The plot is full of tension, and the des...read more »