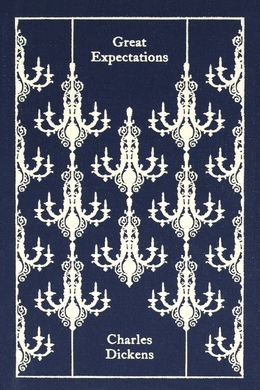 In an overgrown churchyard, a grizzled convict springs upon an orphan boy named Pip. The convict terrifies Pip and threatens to kill him unless the boy helps further his escape. Later, Pip finds himself in a ruined garden where he meets the embittered and crazy Miss Havisham and her foster child, Estella, with whom he instantly falls in love. After a secret benefactor gives him a fortune, Pip moves to London, where he cultivates great expectations for a life that would allow him to discard his impoverished beginnings and socialize with members of the idle upper class. As Pip struggles to become a gentleman, he slowly learns the truth about himself and his illusions, and is tormented endlessly by the beautiful Estella. Written in the last decade of Dickens’s life, Great Expectations reveals the author’s dark attitudes toward Victorian society, its inherent class structure, and its materialism. Yet it persists as one of Dickens’s most popular novels. Richly comic and immensely readable, Great Expectations is a tapestry woven of vividly drawn characters, moral maelstroms, and the sorrow and pity of love.

My father’s family name being Pirrip, and my Christian name Philip, my infant tongue could make of both names nothing longer or more explicit than Pip. So, I called myself Pip, and came to be called Pip.

I give Pirrip as my father’s family name, on the authority of his tombstone and my sister,–Mrs. Joe Gargery, who married the blacksmith. As I never saw my father or my mother, and never saw any likeness of either of them (for their days were long before the days of photographs), my first fancies regarding what they were like were unreasonably derived from their tombstones. The shape of the letters on my father’s, gave me an odd idea that he was a square, stout, dark man, with curly black hair. From the character and turn of the inscription, “Also Georgiana Wife of the Above,” I drew a childish conclusion that my mother was freckled and sickly. To five little stone lozenges, each about a foot and a half long, which were arranged in a neat row beside their grave, and were sacred to the memory of five little brothers of mine,–who gave up trying to get a living, exceedingly early in that universal struggle,–I am indebted for a belief I religiously entertained that they had all been born on their backs with their hands in their trousers-pockets, and had never taken them out in this state of existence.

Ours was the marsh country, down by the river, within, as the river wound, twenty miles of the sea. My first most vivid and broad impression of the identity of things seems to me to have been gained on a memorable raw afternoon towards evening. At such a time I found out for certain that this bleak place overgrown with nettles was the churchyard; and that Philip Pirrip, late of this parish, and also Georgiana wife of the above, were dead and buried; and that Alexander, Bartholomew, Abraham, Tobias, and Roger, infant children of the aforesaid, were also dead and buried; and that the dark flat wilderness beyond the churchyard, intersected with dikes and mounds and gates, with scattered cattle feeding on it, was the marshes; and that the low leaden line beyond was the river; and that the distant savage lair from which the wind was rushing was the sea; and that the small bundle of shivers growing afraid of it all and beginning to cry, was Pip.

“Hold your noise!” cried a terrible voice, as a man started up from among the graves at the side of the church porch. “Keep still, you little devil, or I’ll cut your throat!”

A fearful man, all in coarse gray, with a great iron on his leg. A man with no hat, and with broken shoes, and with an old rag tied round his head. A man who had been soaked in water, and smothered in mud, and lamed by stones, and cut by flints, and stung by nettles, and torn by briars; who limped, and shivered, and glared, and growled; and whose teeth chattered in his head as he seized me by the chin.

“Show us where you live,” said the man. “Pint out the place!”

I pointed to where our village lay, on the flat in-shore among the alder-trees and pollards, a mile or more from the church.

The man, after looking at me for a moment, turned me upside down, and emptied my pockets. There was nothing in them but a piece of bread. When the church came to itself,–for he was so sudden and strong that he made it go head over heels before me, and I saw the steeple under my feet,–when the church came to itself, I say, I was seated on a high tombstone, trembling while he ate the bread ravenously.

“You young dog,” said the man, licking his lips, “what fat cheeks you ha’ got.”

I believe they were fat, though I was at that time undersized for my years, and not strong.

“Darn me if I couldn’t eat em,” said the man, with a threatening shake of his head, “and if I han’t half a mind to’t!”

He started, made a short run, and stopped and looked over his shoulder.

“There, sir!” I timidly explained. “Also Georgiana. That’s my mother.”

“Oh!” said he, coming back. “And is that your father alonger your mother?”

“Ha!” he muttered then, considering. “Who d’ye live with,–supposin’ you’re kindly let to live, which I han’t made up my mind about?”