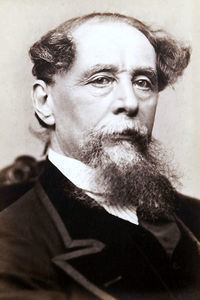 Charles Dickens was the foremost English novelist of the Victorian era and considered one of the English language’s greatest writers; he was acclaimed for his rich storytelling and memorable characters, and achieved massive worldwide popularity during in his lifetime. His first full novel, The Pickwick Papers, brought him immediate fame and this continued right through his career. He maintained a high quality in all his writings and, although rarely departing greatly from his typical “Dickensian” method of always attempting to write a great “story” in a somewhat conventional manner (the dual narrators of Bleak House are a notable exception). He experimented with varied themes, characterizations and genres. Some of these experiments were more successful than others and the public’s taste and appreciation of his many works have varied over time. He was usually keen to give his readers what they wanted, and the monthly or weekly publication of his works in episodes meant that the books could change as the story proceeded at the whim of the public. (source: Wikipedia)

With Dickens’ famous words, Merry Christmas, everyone! “Bah!” said Scrooge. “Humbug!” unfolds a tale that renews the joy that is Christmas. Regardless o...read more »

The “two cities” are Paris in the time of the French Revolution, and London. Dr. Manette, a French physician, having been called in to treat a young pea...read more »

Set against the backdrop of the Gordon Riots of 1780, Barnaby Rudge is a story of mystery and suspense which begins with an unsolved double murder and g...read more »

Bleak House, Dickens’s most daring experiment in the narration of a complex plot, challenges the reader to make connections - between the fashionable an...read more »

Dickens’s classic tale of a young man’s adventures on his journey from an unhappy childhood to his success as a novelist. Among the characters he encoun...read more »

Set in the backdrop of London, the narrative is about the protagonist Dombey who wants a son to run his business. The tale showcases human emotions and ...read more »

In an overgrown churchyard, a grizzled convict springs upon an orphan boy named Pip. The convict terrifies Pip and threatens to kill him unless the boy ...read more »

Coketown is dominated by the figure of Mr Thomas Gradgrind, school headmaster and model of Utilitarian success. Feeding both his pupils and family with ...read more »

As for many of Dickens’ novels, highlighting social injustices is at the heart of Little Dorrit. His father was imprisoned for debt, and Dickens’ shines...read more »

Dickens turns his satirical eye on America in “Martin Chuzzlewit”, when young Martin embarks on a voyage that is destined to affect the fortunes of his ...read more »

The biggest mystery of The Mystery of Edwin Drood is how it ends. It began as a serial, as nearly all of Dickens’ novels did, but only six instalments w...read more »

Nicholas Nickleby was hailed as a comic triumph and firmly established Dickens as a ‘literary gentleman’. It has a full supporting cast of delectable ch...read more »

A story of mistaken identities, courage, justice, and a journey that stretches from the depths of the city of London to the Alps and the Mediterranean.

At the heart of Dickens’s second novel is a story as much about crime and poverty as it is about justice and charity. Orphaned at birth, Oliver Twist gr...read more »

Our Mutual Friend, Dickens’ last complete novel, gives one of his most comprehensive and penetrating accounts of Victorian society. Its vision of a cult...read more »

In this charming collection of short stories, Dickens presents a galaxy of beautifully drawn characters. He presents the branches of Christmas tree as l...read more »

A Christmas love story and the only one of Dickens’ Christmas stories without a supernatural theme, is about a group of philosophical friends who meet o...read more »

Redlaw is a teacher of chemistry who often broods over wrongs done him and grief from his past. He is haunted by a spirit, who is not so much a ghost as...read more »

The Old Curiosity Shop is the story of Little Nell, a beautiful and virtuous young girl who lives with her grandfather in his shop of curiosities. Her o...read more »

Dickens takes up on an exploration of the perils, travels, and adventures of the Pickwick Club’s members: the founding chairman, former businessman and ...read more »

While the three ghosts that visited Ebenezer Scrooge was Charles Dickens’ most famous apparitions, his interest in the supernatural did not end there. T...read more »