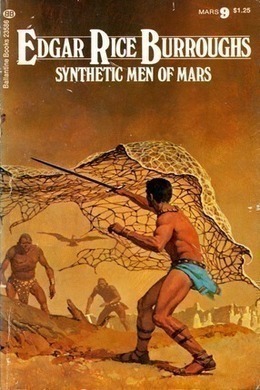 John Carter, mighty Warlord of Mars, rides to new and terrifying adventures. Captured by deadly warriors mounted on huge birds he is taken to the ill-omened city of Morbus. There he meets Ras Thavas, evil genius and master surgeon. A man who has succeeded in his nightmare wish of creating life in his own beings - creatures that ultimately rebel and threaten the lives of Ras Thavas, of John Carter and all of Mars

From Phundahl at their western extremity, east to Toonol, the Great Toonolian Marshes stretch across the dying planet for eighteen hundred earth miles like some unclean, venomous, Gargantuan reptile–an oozy marshland through which wind narrow watercourses connecting occasional bodies of open water, little lakes, the largest of which covers but a few acres. This monotony of marsh and jungle and water is occasionally broken by rocky islands, themselves usually clothed in jungle verdure, the skeletal remains of an ancient mountain range.

Little is known of the Great Toonolian Marshes in other portions of Barsoom, for this inhospitable region is peopled by fierce beasts and terrifying reptiles, by remnants of savage aboriginal tribes long isolated, and is guarded at either extremity by the unfriendly kingdoms of Phundahl and Toonol which discourage intercourse with other nations and are constantly warring upon one another.

Upon an island near Toonol, Ras Thavas, The Master Mind of Mars, had labored in his laboratory for nearly a thousand years until Vobis Kan, Jeddak of Toonol, turned against him and drove him from his island home and later repulsed a force of Phundahlian warriors led by Gor Hajus, the Assassin of Toonol, which had sought to recapture the island and restore Ras Thavas to his laboratory upon his promise to devote his skill and learning to the amelioration of human suffering rather than to prostitute them to the foul purposes of greed and sin.

Following the defeat of his little army, Ras Thavas had disappeared and been all but forgotten as are the dead, among which he was numbered by those who had known him; but there were some who could never forget him. There was Valla Dia, Princess of Duhor, whose brain he had transferred to the head of the hideous old Xaxa, Jeddara of Phundahl, that Xaxa might acquire the young and beautiful body of Valla Dia. There was Vad Varo, her husband, one time assistant to Ras Thavas, who had restored her brain to her own body–Vad Varo, who had been born Ulysses Paxton in the United States of America and presumably died in a shell hole in France; and there was John Carter, Prince of Helium, Warlord of Mars, whose imagination had been intrigued by the tales Vad Varo had told him of the marvelous skill of a world’s greatest scientist and surgeon.

John Carter had not forgotten Ras Thavas, and when an emergency arose in which the skill of this greatest of surgeons was the sole remaining hope, he determined to seek him out and find him if he still lived. Dejah Thoris, his princess, had suffered an appalling injury in a collision between two swift airships; and had lain unconscious for many weeks, her back broken and twisted, until the greatest surgeons of all Helium had at last given up all hope. Their skill had been only sufficient to keep her alive; it could not mend her.

But how to find Ras Thavas? That was the question. And then he recalled that Vad Varo had been the assistant of the great surgeon. Perhaps, if the master could not be found, the skill of the pupil might be adequate. Then, too, of all men upon Barsoom, Vad Varo would be most likely to know the whereabouts of Ras Thavas. And so John Carter determined to go first to Duhor.

He selected from his fleet a small swift cruiser of a new type that had attained a speed of four hundred miles an hour–over twice the speed of the older types which he had first known and flown through the thin air of Mars. He would have gone alone, but Carthoris and Tara and Thuvia pleaded with him not to do so. At last he gave in and consented to take one of the officers of his personal troops, a young padwar named Vor Daj. To him we are indebted for this remarkable tale of strange adventure upon the planet Mars; to him and Jason Gridley whose discovery of the Gridley Wave has made it possible for me to receive this story over the special Gridley radio receiving set which Jason Gridley built out here in Tarzana, and to Ulysses Paxton who translated it into English and sent it across some forty million miles of space.

I shall give you the story as nearly as possible in the words of Vor Daj as is compatible with clarity. Certain Martian words and idioms which are untranslatable, measures of time and of distance will be usually in my own words; and there are occasional interpolations of my own that I have not bothered to assume responsibility for, since their origin will be obvious to the reader. In addition to these, there must undoubtedly have been some editing on the part of Vad Varo.

So now to the strange tale as told by Vor Daj.