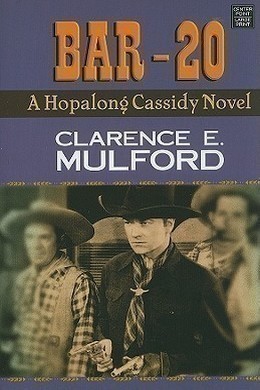 Clarence Mulford’s classic Western introduces the legendary Hopalong Cassidy and other colorful cohorts from the Bar-20 ranch. While the Hopalong Cassidy of film and TV (portrayed by the silver-haired, avuncular William Boyd) was clean-cut and polished, Mulford’s original Cassidy is rough-and-tumble and foul-mouthed, thriving on brawls and gun-fights. Bar-20 depicts Cassidy as he was originally conceived, fierce and free-wheeling, and matches the cowboy hero up against Slim Travennes, the violent head of a vigilante gang. Filled with hard characters and gritty gun-play, Bar-20 is a Hopalong Cassidy story from the golden days of the Western that is not to be missed.

The town lay sprawled over half a square mile of alkali plain, its main Street depressing in its width, for those who were responsible for its inception had worked with a generosity born of the knowledge that they had at their immediate and unchallenged disposal the broad lands of Texas and New Mexico on which to assemble a grand total of twenty buildings, four of which were of wood. As this material was scarce, and had to be brought from where the waters of the Gulf lapped against the flat coast, the last-mentioned buildings were a matter of local pride, as indicating the progressiveness of their owners.

These creations of hammer and saw were of one story, crude and unpainted; their cheap weather sheathing, warped and shrunken by the pitiless sun, curled back on itself and allowed unrestricted entrance to alkali dust and air. The other shacks were of adobe, and reposed in that magnificent squalor dear to their owners, Indians and Mexicans.

It was an incident of the Cattle Trail, that most unique and stupendous of all modern migrations, and its founders must have been inspired with a malicious desire to perpetrate a crime against geography, or else they reveled in a perverse cussedness, for within a mile on every side lay broad prairies, and two miles to the east flowed the indolent waters of the Rio Pecos itself. The distance separating the town from the river was excusable, for at certain seasons of the year the placid stream swelled mightily and swept down in a broad expanse of turbulent, yellow flood.

Buckskin was a town of one hundred inhabitants, located in the valley of the Rio Pecos fifty miles south of the Texas-New Mexico line. The census claimed two hundred, but it was a well-known fact that it was exaggerated. One instance of this is shown by the name of Tom Flynn. Those who once knew Tom Flynn, alias Johnny Redmond, alias Bill Sweeney, alias Chuck Mullen, by all four names, could find them in the census list. Furthermore, he had been shot and killed in the March of the year preceding the census, and now occupied a grave in the young but flourishing cemetery. Perry’s Bend, twenty miles up the river, was cognizant of this and other facts, and, laughing in open derision at the padded list, claimed to be the better town in all ways, including marksmanship.

One year before this tale opens, Buck Peters, an example for the more recent Billy the Kid, had paid Perry’s Bend a short but busy visit. He had ridden in at the north end of Main Street and out at the south. As he came in he was fired at by a group of ugly cowboys from a ranch known as the C 80. He was hit twice, but he unlimbered his artillery, and before his horse had carried him, half dead, out on the prairie, he had killed one of the group. Several citizens had joined the cowboys and added their bullets against Buck. The deceased had been the best bartender in the country, and the rage of the suffering citizens can well be imagined. They swore vengeance on Buck, his ranch, and his stamping ground.

The difference between Buck and Billy the Kid is that the former never shot a man who was not trying to shoot him, or who had not been warned by some action against Buck that would call for it. He minded his own business, never picked a quarrel, and was quiet and pacific up to a certain point. After that had been passed he became like a raging cyclone in a tenement house, and storm-cellars were much in demand.

“Fanning” is the name of a certain style of gun play not unknown among the bad men of the West. While Buck was not a bad man, he had to rub elbows with them frequently, and he believed that the sauce for the goose was the sauce for the gander. So be bad removed the trigger of his revolver and worked the hammer with the thumb of the “gun hand” or the heel of the unencumbered hand. The speed thus acquired was greater than that of the more modern double-action weapon. Six shots in a few seconds was his average speed when that number was required, and when it is thoroughly understood that at least some of them found their intended bullets it is not difficult to realize that fanning was an operation of danger when Buck was doing it.

He was a good rider, as all cowboys are, and was not afraid of anything that lived. At one time he and his chums, Red Connors and Hopalong Cassidy, had successfully routed a band of fifteen Apaches who wanted their scalps. Of these, twelve never hunted scalps again, nor anything else on this earth, and the other three returned to their tribe with the report that three evil Spirits had chased them with “wheel guns” (cannons).