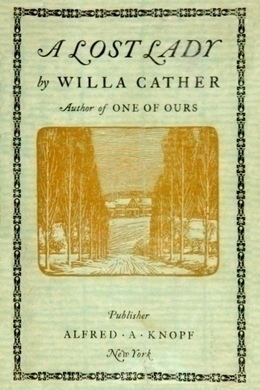 Marian Forrester is the symbolic flower of the Old American West. She draws her strength from that solid foundation, bringing delight and beauty to her elderly husband, to the small town of Sweet Water where they live, to the prairie land itself, and to the young narrator of her story, Neil Herbert. All are bewitched by her brilliance and grace, and all are ultimately betrayed. For Marian longs for ‘life on any terms,’ and in fulfilling herself, she loses all she loved and all who loved her. This, Willa Cather’s most perfect novel, is not only a portrait of a troubling beauty, but also a haunting evocation of a noble age slipping irrevocably into the past.

Thirty or forty years ago, in one of those grey towns along the Burlington railroad, which are so much greyer today than they were then, there was a house well known from Omaha to Denver for its hospitality and for a certain charm of atmosphere. Well known, that is to say, to the railroad aristocracy of that time; men who had to do with the railroad itself, or with one of the “land companies” which were its by-products. In those days it was enough to say of a man that he was “connected with the Burlington.” There were the directors, the general managers, vice-presidents, superintendents, whose names we all knew; and their younger brothers or nephews were auditors, freight agents, departmental assistants. Everyone “connected” with the Road, even the large cattle- and grain-shippers, had annual passes; they and their families rode about over the line a great deal. There were then two distinct social strata in the prairie States; the homesteaders and hand-workers who were there to make a living, and the bankers and gentlemen ranchers who came from the Atlantic seaboard to invest money and to “develop our great West,” as they used to tell us.

When the Burlington men were travelling back and forth on business not very urgent, they found it agreeable to drop off the express and spend a night in a pleasant house where their importance was delicately recognized; and no house was pleasanter than that of Captain Daniel Forrester, at Sweet Water. Captain Forrester was himself a railroad man, a contractor, who had built hundreds of miles of road for the Burlington,–over the sage brush and cattle country, and on up into the Black Hills.

The Forrester place, as every one called it, was not at all remarkable; the people who lived there made it seem much larger and finer than it was. The house stood on a low round hill, nearly a mile east of town; a white house with a wing, and sharp-sloping roofs to shed the snow. It was encircled by porches, too narrow for modern notions of comfort, supported by the fussy, fragile pillars of that time, when every honest stick of timber was tortured by the turning-lathe into something hideous. Stripped of its vines and denuded of its shrubbery, the house would probably have been ugly enough. It stood close into a fine cottonwood grove that threw sheltering arms to left and right and grew all down the hillside behind it. Thus placed on the hill, against its bristling grove, it was the first thing one saw on coming into Sweet Water by rail, and the last thing one saw on departing.

To approach Captain Forrester’s property, you had first to get over a wide, sandy creek which flowed along the eastern edge of the town. Crossing this by the footbridge or the ford, you entered the Captain’s private lane bordered by Lombardy poplars, with wide meadows lying on either side. Just at the foot of the hill on which the house sat, one crossed a second creek by the stout wooden road-bridge. This stream traced artless loops and curves through the broad meadows that were half pasture land, half marsh. Any one but Captain Forrester would have drained the bottom land and made it into highly productive fields. But he had selected this place long ago because it looked beautiful to him, and he happened to like the way the creek wound through his pasture, with mint and joint-grass and twinkling willows along its banks. He was well off for those times, and he had no children. He could afford to humour his fancies.

When the Captain drove friends from Omaha or Denver over from the station in his democrat wagon, it gratified him to hear these gentlemen admire his fine stock, grazing in the meadows on either side of his lane. And when they reached the top of the hill, it gratified him to see men who were older than himself leap nimbly to the ground and run up the front steps as Mrs. Forrester came out on the porch to greet them. Even the hardest and coldest of his friends, a certain narrow-faced Lincoln banker, became animated when he took her hand, tried to meet the gay challenge in her eyes and to reply cleverly to the droll word of greeting on her lips.