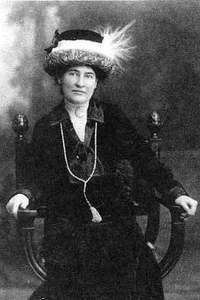 Willa Cather is among the most eminent female American authors. She is known for her depictions of U.S. prairie life in novels like O Pioneers, My Antonia, and Death Comes for the Archbishop. Cather was born in Virginia’s Shenandoah Valley but her family relocated to Nebraska in 1883 and she spent the rest of her childhood in Red Cloud, Nebraska. She insisted on attending college, so her family borrowed money so she could enrol at the University of Nebraska-Lincoln. While there she became a regular contributor to the Nebraska State Journal.

After failing to obtain a position at UNL, she moved to Pennsylvania, where she taught high school and worked for Home Monthly and McClure’s Magazine. The latter publication serialized her first novel, Alexander’s Bridge, which was heavily influenced by Henry James. For her novels she returned to the prairie for inspiration, and these works became popular and critical successes. She won the Pulitzer Prize in 1923 for One of Ours (1922). (source: Wikipedia)

Bartley Alexander, an engineer famous for the audacious structure of his North American bridges, is at the height of his reputation. He has a distinguis...read more »

Marian Forrester is the symbolic flower of the Old American West. She draws her strength from that solid foundation, bringing delight and beauty to her ...read more »

Death Comes for the Archbishop (1927)

There is something epic–and almost mythic–about this sparsely beautiful novel by Willa Cather, although the story it tells is that of a single human lif...read more »

In this haunting novel, the Pulitzer Prize–winning author of My Ántonia and Death Comes for the Archbishop performs a series of crystalline variations o...read more »

After the death of his parents, Jim is sent to live with his grandparents on the Nebraska plains. By chance on that same train is a bright-eyed girl, An...read more »

“The history of every country begins in the heart of a man or a woman,” writes Willa Cather in O Pioneers! The country is America; the woman is Alexandr...read more »

At the end of the seventeenth century, on that ‘grey rock in the Canadian wilderness’ known as Quebec, a French family, the Auclairs, begin a life very ...read more »

Set in the 1890s in Moonstone, a fictional town located in Colorado, The Song of the Lark is the self-portrait of an artist in the making. The story rev...read more »

On the eve of his move to a new, more desirable residence, Professor Godfrey St. Peter finds himself in the shabby study of his former home. Surrounded ...read more »

In the stories that comprise The Troll Garden, her first book, Willa Cather evokes the devastated, romantic dreams that haunt her characters. Artists, i...read more »

Memorable short stories by a great American writer. “Coming, Aphrodite!” is an unforgettable novella of a young artist in New York and his relationship ...read more »