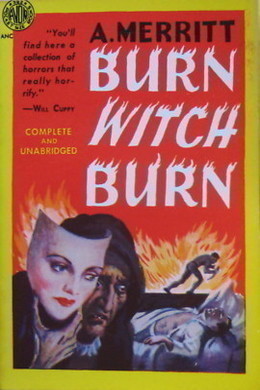 The fabled novel of an eminent physician who agrees to work along side one of the city’s most notorious gangsters to put an end to a strange and mysterious series of deaths that have claimed a child, a millionaire, one of the don’s men and the doctor’s nurse. Investigation leads the pair to the uncanny Madame Mandilip, proprietress of a most unusual doll shop, and her apparently mute and terrified daughter. Soon the Mafia don lies on the verge of death and the doctor finds himself the victim of strange hallucinations–or are they?

This novel, which inspired the legendary 1930’s horror film, Devil Doll with Lionel Barymore, is considered one of the supreme masterpieces of dark fantasy.

I heard the clock strike one as I walked up the hospital steps. Ordinarily I would have been in bed and asleep, but there was a case in which I was much interested, and Braile, my assistant, had telephoned me of certain developments which I wished to observe. It was a night in early November. I paused for a moment at the top of the steps to look at the brilliancy of the stars. As I did so an automobile drew up at the entrance to the hospital.

As I stood, wondering what its arrival at that hour meant, a man slipped out of it. He looked sharply up and down the deserted street, then threw the door wide open. Another man emerged. The two of them stooped and seemed to be fumbling around inside. They straightened and then I saw that they had locked their arms around the shoulders of a third. They moved forward, not supporting but carrying this other man. His head hung upon his breast and his body swung limply.

A fourth man stepped from the automobile.

I recognized him. He was Julian Ricori, a notorious underworld chieftain, one of the finished products of the Prohibition Law. He had been pointed out to me several times. Even if he had not been, the newspapers would have made me familiar with his features and figure. Lean and long, with silvery white hair, always immaculately dressed, a leisured type from outward seeming, rather than leader of such activities as those of which he was accused.

I had been standing in the shadow, unnoticed. I stepped out of the shadow. Instantly the burdened pair halted, swiftly as hunting hounds. Their free hands dropped into the pockets of their coats. Menace was in that movement.

“I am Dr. Lowell,” I said, hastily. “Connected with the hospital. Come right along.”

They did not answer me. Nor did their gaze waver from me; nor did they move. Ricori stepped in front of them. His hands were also in his pockets. He looked me over, then nodded to the others; I felt the tension relax.

“I know you, Doctor,” he said pleasantly, in oddly precise English. “But that was quite a chance you took. If I might advise you, it is not well to move so quickly when those come whom you do not know, and at night–not in this town.”

“Then,” he smiled, faintly, “your judgment was doubly at fault. And my advice doubly pertinent.”

There was an awkward moment of silence. He broke it.

“And being who I am, I shall feel much better inside your doors than outside.”

I opened the doors. The two men passed through with their burden, and after them Ricori and I. Once within, I gave way to my professional instincts and stepped up to the man the two were carrying. They shot a quick glance at Ricori. He nodded. I raised the man’s head.

A little shock went through me. The man’s eyes were wide open. He was neither dead nor unconscious. But upon his face was the most extraordinary expression of terror I had ever seen in a long experience with sane, insane and borderland cases. It was not undiluted fear. It was mixed with an equally disturbing horror. The eyes, blue and with distended pupils, were like exclamation points to the emotions printed upon that face. They stared up at me, through me and beyond me. And still they seemed to be looking inward–as though whatever nightmare vision they were seeing was both behind and in front of them.

“Exactly!” Ricori had been watching me closely. “Exactly, Dr. Lowell, what could it be that my friend has seen–or has been given– that could make him appear so? I am most anxious to learn. I am willing to spend much money to learn. I wish him cured, yes–but I shall be frank with you, Dr. Lowell. I would give my last penny for the certainty that those who did this to him could not do the same thing to me–could not make me as he is, could not make me see what he is seeing, could not make feel what he is feeling.”

At my signal, orderlies had come up. They took the patient and laid him on a stretcher. By this time the resident physician had appeared. Ricori touched my elbow.

“I know a great deal about you, Dr. Lowell,” he said. “I would like you to take full charge of this case.”

He continued, earnestly: “Could you drop everything else? Spend all your time upon it? Bring in any others you wish to consult–don’t think of expense–”

“A moment, Mr. Ricori,” I broke in. “I have patients who cannot be neglected. I will give all the time I can spare, and so will my assistant, Dr. Braile. Your friend will be constantly under observation here by people who have my complete confidence. Do you wish me to take the case under those conditions?”