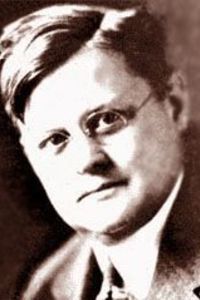 Abraham Grace Merritt – known by his byline, A. Merritt – was an American Sunday magazine editor and a writer of fantastic fiction. Merritt’s writings were heavily influenced by H. Rider Haggard, Robert W. Chambers, Helena Blavatsky and Gertrude Barrows Bennett, with Merritt having “emulated Bennett’s earlier style and themes.” His stories typically revolve around conventional pulp magazine themes: lost civilizations, hideous monsters, etc. His heroes are gallant Irishmen or Scandinavians, his villains treacherous Germans or Russians and his heroines often virginal, mysterious and scantily clad. What sets Merritt apart from the typical pulp author, however, is his lush, florid prose style and his exhaustive, at times exhausting, penchant for adjective-laden detail. Merritt’s fondness for micro-description nicely complements the pointillistic style of Bok’s illustrations. The Science Fiction and Fantasy Hall of Fame inducted Merritt in 1999.

The fabled novel of an eminent physician who agrees to work along side one of the city’s most notorious gangsters to put an end to a strange and mysteri...read more »

This Two Thousand Year-Old Sorceress Had the Power to Turn People into Shadows! Here is A. Merritt’s masterwork, the best of all his classic fantasies. ...read more »

Angry Warrior, Modern Man… Leif Langdon was suddenly ripped from the 20th century and plunged into the ancient world of The Mirage. But his entrance int...read more »

The most beautiful and powerful people in the world had bargained with the Devil. They played Russian Roulette with seven footprints to world domination...read more »

The Metal Monster follows a group of botanists who discover the seemingly reanimated Darius III of Persia and legions of soldiers. The group is saved by...read more »

One of the most gripping fantasies ever written, The Moon Pool embodies all the romanticism and poetic nostalgia characteristic of A. Merritt’s writings...read more »

Wealthy young John Kenton receives a mysterious inscribed block of stone from an archaeological dig in Mesopotamia. It proves to encase the carved image...read more »